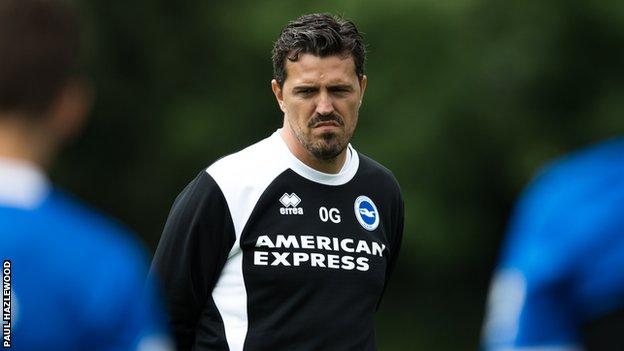 The 40-year-old quit Maccabi Tel Aviv to take up the role at the Championship side in June after the dismissal of former boss Gus Poyet.

Garcia has now penned his contract and he told Brighton's website: "I am delighted to have signed a long-term contract with the club.

"I am now very much looking forward to the challenge ahead."

Brighton said the post of head coach was a newly-created role when Garcia arrived at the south-coast outfit.

Garcia played for Barcelona for six years and has also coached their youth team before guiding Maccabi to the league title last season.

"Brighton are one of the most exciting clubs in Europe and the potential here is very good," added Garcia.

"The squad is strong and the footballing set-up is excellent. The aim is to continue the good progress that has been made in recent seasons.

"Pre-season preparations are going well and, like the supporters, I am looking forward to an exciting season."

The moves of coach Ruben Martinez and fitness coach Juan Torrijo Navaro in leaving Maccabi and joining Garcia at Brighton have also been confirmed.

"The club has made significant progress in the past three seasons, and our aim is to continue this progress under Oscar's guidance," said Brighton chairman Tony Bloom.

"His footballing principles and philosophies will ensure we continue to play with the style and in the way our fans have become accustomed."