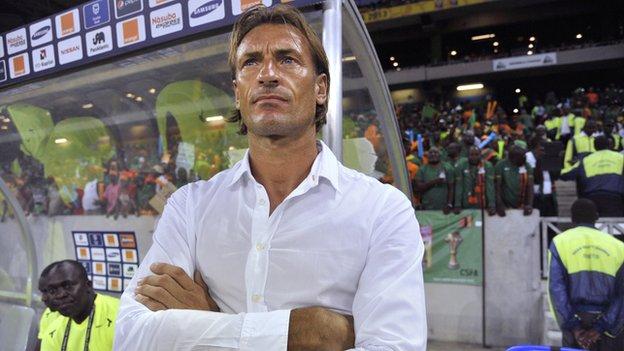 Zambia were crowned the champions of southern Africa for a fourth time as they beat defending champions Zimbabwe 2-0 in the Cosafa Cup final in Ndola.

Two goals either side of half-time from Alex N'gonga and Kabaso Chongo carried the day for the host nation.

They doubled their lead deep into stoppage time when Chongo's superb free kick sailed into the net.

Zimbabwe had limited chances in front of goal and on the few occasions that they found the target, the Zambian goalkeeper Danny Munyau stood his ground.

With his eye on September's World Cup clash against Ghana in Kumasi, coach Herve Renard (pictured) will have drawn a great deal of encouragement from the way the match went.

The Zambians rediscovered a little of the zip that saw them crowned African champions in 2012.

Earlier in the day Captain Wayne Sandilands saved a penalty as South Africa beat Lesotho 2-1 to grab third place at the tournament.

With Ralekoti Mokhahlane sidelined, Maile took over the penalty-taking duties and converted one midway through the opening half for the Crocodiles.

It was the second goal of the tournament for Kekana, whose industry and finishing earned him the man-of-the-match award.