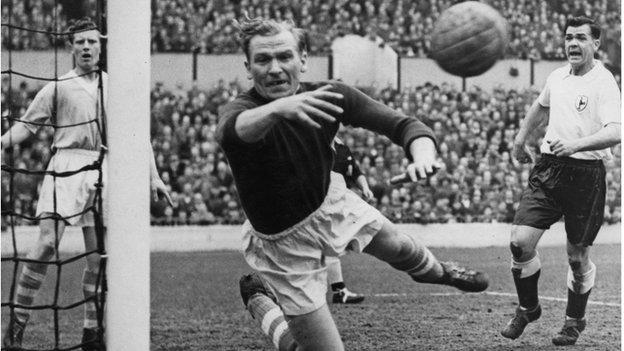 Former Manchester City goalkeeper Bert Trautmann, who died on Friday, is not just being mourned in England and Germany but also in Tanzania.

Trautman died in Spain on Friday at the age of 89. He was famous for playing on in the 1956 FA Cup final despite breaking his neck.

A Tanzania FA statement said he would be remembered for his work that set the foundation for the development of the sport in the country.

Trautmann arrived in the East African nation in 1974 as part of West Germany's sports assistance programme.

He reorganised the country's league and developed the skills of local coaches.

"The league system we have now is a brainchild of Trautmann," Atillion Tagalile, a former sports reporter, told BBC Sport.

Before Trautmann's arrival, Tanzania had a 20-team league played in a two-legged home and away knockout format.

However, he reduced the number of teams to 12 and introduced a league system of playing home and away.

In addition, the German held coaching clinics for local coaches and formed an association known as Tanzania Football Coaches Association (Tafca) to oversee skill development for the coaches.

"I attended one of his courses in Arusha in 1975 soon after retiring from the national team.

"Before his arrival, there was no training system for the coaches."

Joel Bendera, is one of the coaches who benefited from the scheme, he spend nine months in Germany along with two other Tanzanians.

When Bendera returned, he was appointed head coach of Tanzania's national team and guided their only ever Africa Cup of Nations finals in 1980.

"He put emphasis on youth development as well, he toured the country in search of talents and we were able to get a strong team that went on to play the Nations Cup in Nigeria," added Kibaden.

Trautmann helped restructure the FA as well as designing an administrative procedure for the association.

"He reorganised our operation structure and also worked with administrators on football development," Said El Maamry, who was chairman of the Football Association of Tanzania (Fat) at the time, said.

"TFF has sent condolences to his family as well as the German and English FA's, and wished them to be strong in these difficult time," the statement added.