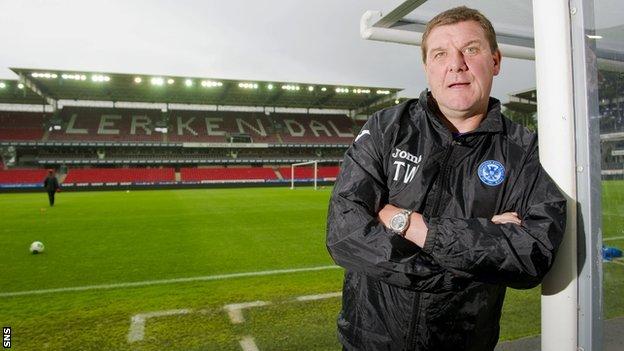 St Johnstone manager Tommy Wright has warned his players against overconfidence in their Europa League second qualifying round tie.

Saints hold a 1-0 lead after beating Rosenborg in the first leg in Norway.

Wright told BBC Scotland he would make sure the players took nothing for granted in Thursday's second leg.

"In terms of the tie we've only got the job half-done. We've got to make sure we're in a position to finish it off next week," he said.

The midfield were excellent all night, their work-rate, their movement

The Saints manager also maintained there would be little change in approach from the counter-attacking tactics which brought success in Trondheim.

"I don't think we have to change too much," said Wright.

"We had 10 shots in the game, five corners, we probably ended up a bit too deep later on, but that was a reflection of how they were chasing the game to get an equaliser.

"But I wouldn't change too much."

Wright also admitted he had been forced into a late tactical change in Norway after seeing the Rosenborg line-up.

"They went with two deeper midfielders and one higher up," said the Northern Irishman.

"So we had to slightly change, but the midfield were excellent all night, their work-rate, their movement.

Should Saints hold on to their lead, in the third qualifying round, with the first leg away from home on 1 August and the return on 8 August.