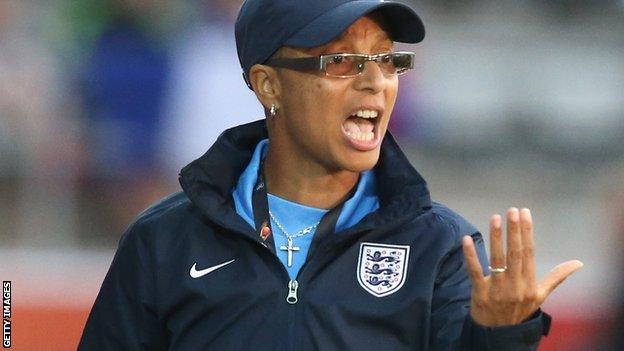 Powell's side finished bottom of Group C after failing to win a game against Spain, Russia and France.

The squad included five players working their way back from injury.

"It was a massive risk taking so many injured players," said Beard, whose team top the Women's Super League.

"There were also players picked who haven't been playing particularly well.

"When you go into a tournament in bad form, it's difficult to get players to play three games in seven days without the rotation."

Having previously reached the Euro 2009 final against Germany, England's performance in Sweden was their worst at a European Championship since 2001.

"The manager and the coaching staff have to take the responsibility," Beard told BBC Sport.

Following defeats by Spain and France, and drawing 1-1 with the tournament's lowest-ranked team, Russia, Powell defended her role, saying her side's preparation was "spot-on" but they "did not click"; she drew criticism from Football Association development director Sir Trevor Brooking for not introducing younger players in the second group match against Russia.

Beard said the England side lacked freshness and suffered from "suicidal" tactics against France, where they were thumped 3-0.

Only midfielder Fara Williams played from Beard's Liverpool side, with defenders Lucy Bronze and Gemma Bonner unused substitutes despite being two of five players in the squad who won the Under-19 European Championship four years ago. From that quintet, only Everton striker Toni Duggan got playing time in Sweden.

Beard believed a similar scenario occurred in the 2012 Olympics when Team GB, managed by Powell, were defeated in the last eight by Canada having beaten Brazil 1-0 in front of 70,000 fans at Wembley.

"Hope said it herself, there are no easy games, and the same happened in the Olympics, the squad wasn't rotated. In my view fatigue was the reason why Great Britain got beaten by Canada and maybe against Russia it was the same," he explained.

Beard's side are top of the table, thanks to 10 goals in 12 games by the league's leading striker Natasha Dowie.

Powell opted not to pick the 25-year-old for Euro 2013, selecting Arsenal striker Ellen White instead. White failed to score at Euro 2013 and has scored four times this season, but does not have a league goal.

"I don't know why [Dowie] wasn't picked, that's a question that Hope or [assistant coach] Brent Hills need to answer," Beard added. "You have to take players that are in form."

Asked if it was time for Powell to step down after 15 years in charge, Beard said: "That's only a decision the FA can make."

But Chelsea Ladies coach Emma Hayes said: "There is no doubting that Hope's contribution to the women's game is massive but I do think it's important to differentiate between what is done to develop the women's game off the field, and what we need in terms of performance on it.

"Maybe it's time to look at freshening things up at the senior level so the players are exposed to a different voice. How that is done, is for the FA to decide."