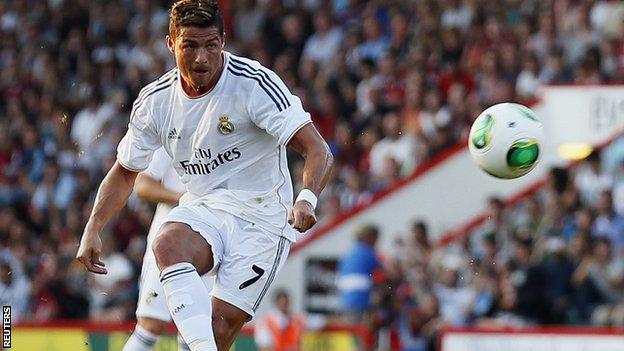 A Real Madrid side including Cristiano Ronaldo, Luka Modric and Mesut Ozil cruised to a 6-0 friendly win at Championship side Bournemouth.

New Real boss Carlo Ancelotti took a near full-strength squad to the South Coast for his first game in charge of the nine-time European champions.

Ronaldo scored a first-half brace before Germany midfielder Sami Khedira added a third before the break.

Former Manchester United star Ronaldo, the world's most expensive footballer, was cheered by all four sides of the ground throughout the match and entertained fans with a series of flicks and tricks.

Bournemouth, who won promotion to the second-tier of English football last season, announced the glamorous friendly at Goldsands Stadium earlier this month.

Cherries fans queued overnight to buy tickets, which cost up to £60, and the match was played in front of a capacity 12,000 crowd.

Only players who represented Spain and Brazil in the recent Confederations Cup tournament, including Iker Casillas, Sergio Ramos and Marcelo, were absent from Ancelotti's squad.