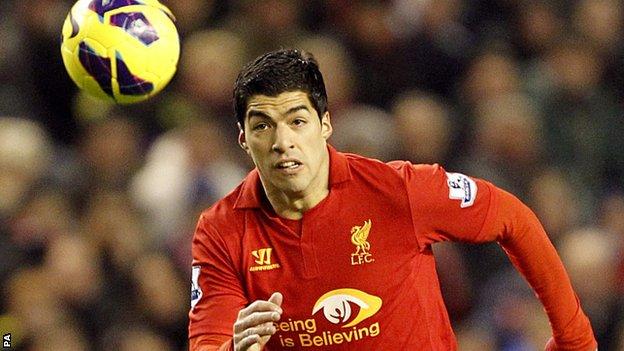 Luis Suarez has joined Liverpool's pre-season tour of Australia and will hold talks about his future with boss Brendan Rodgers in the coming days.

The Uruguay striker, 26, flew to Melbourne from Montevideo on Sunday having been given extended leave by the Reds following the Confederations Cup.

He wants to leave Anfield to play for a Champions League club, with Arsenal having a £30m bid rejected.

Rodgers will re-emphasise to Suarez that Liverpool do not want to sell him.

The Northern Irishman is also expected to remind his forward of the debt he owes the club for standing by him during two difficult and highly controversial seasons.

Ex-Ajax player Suarez, who was Liverpool's top scorer last season with 23 Premier League goals, must now wait to learn if the Gunners are prepared to increase their offer for him to around £40m.

It is understood he remains hopeful that Real Madrid will follow up their interest, but at this stage their valuation of the player is well short of Liverpool's.

Speculation has also grown about Suarez's future since he was punished with a 10-game ban at the end of the April for biting Chelsea's Branislav Ivanovic. He still has to serve six games of that suspension.

That incident followed the eight-game ban he was given in December 2011 after being found guilty of racially abusing Manchester United's Patrice Evra.

Suarez has complained about his disenchantment with life in England, stating he was "not prepared to continue suffering at the hands of the English journalists".