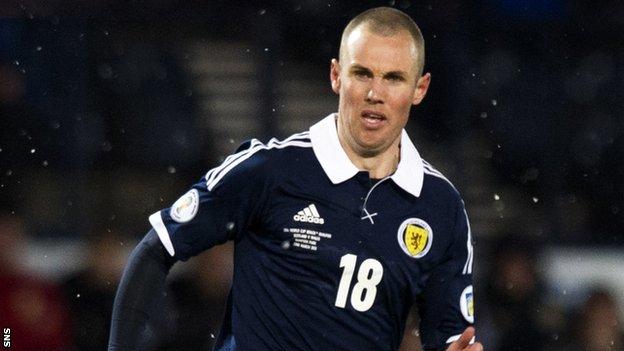 Gordon Strachan has named a 29-man squad for next month's .

Kenny Miller was always going to be back in the squad

Strachan, on including fit-again Brown, said: "He gets better and better as he gets older."

Brown missed the victory over Croatia with a hip injury but is available to feature at Wembley.

"He still has that energy but is controlling himself a lot better," Strachan said of the Celtic skipper.

Strachan's side will use the friendly at Wembley on 14 August as preparation for their World Cup qualifier, at home to Belgium in September.

Scotland's World Cup qualification victory in Croatia in June helped them climb 24 places to 50th in the world rankings.

The Scots can no longer qualify for next year's finals in Brazil, but the victory in Zagreb ensured they will be in pot four for the draw for Euro 2016.

Miller is in line to add to his 68 caps and Strachan is delighted to call upon the veteran striker's services.

"Kenny was always going to be back in the squad," said the Scotland boss.

"I spoke to him before he had this problem with his hamstring when we went away to Croatia and it was better that he rested. That seems to be a good idea.

"So, hopefully it has benefited him and he is back for this squad.

"We look forward to having him back because he is a top professional and sets a standard at training that is great for the younger guys."

The Scots will be without captain Darren Fletcher, as he continues his recovery from a bowel operation.

Fletcher won the last of his 61 caps for Scotland in November 2012.

Sunderland striker Steven Fletcher is sidelined with an ankle injury and Strachan hopes to have the pair back at some stage.

"Steven won't be right for the England game but when you are talking about injuries like this, I think it is better to leave it to the clubs to tell you exactly what is going on," said Strachan.

"I spoke to him about two weeks ago and the situation might have changed. It's the same with Darren, I'll leave it to the club to tell you what is going on rather than me.

"But they are top players and top blokes. They will be missed, that is for sure. The quicker they get back the better."