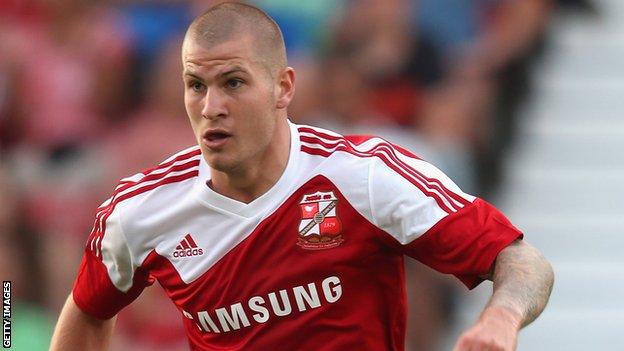 Swindon have accepted a bid of around £200,000 for striker James Collins from Scottish Premier League club Hibernian.

The 22-year-old has been at the County Ground for a year, having joined from Shrewsbury last summer.

Swindon paid a tribunal-set fee of £140,000 plus add-ons for Collins and will owe the Shrews 20% of any profit made by the sale of the striker.

After missing out on promotion to the Championship in May, Swindon are now looking to reduce their playing budget for the 2013-14 campaign.

Of the 11 players that started their play-off semi-final defeat by Brentford, only five remain at the club.

And the future of some of their remaining senior players remains unclear, with several not travelling on their pre-season trip to Portugal this week.

Collins is among the party who stayed behind, along with Jay McEveley, Paul Caddis, Paul Benson, Luke Rooney and Adam Rooney.

Griffiths has returned to League One club Wolves after his loan spell finished, while Doyle has signed for Chesterfield.