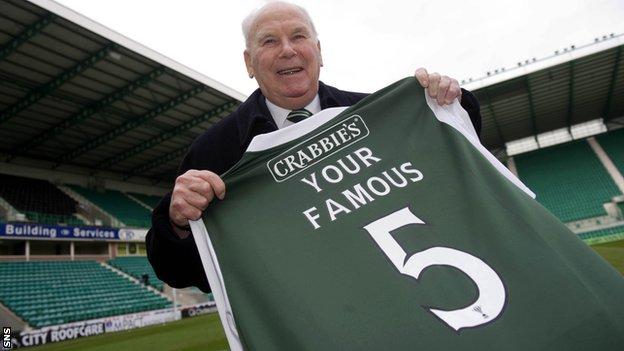 Former Hibernian player Lawrie Reilly has died at the age of 84.

Hibs chairman Rod Petrie described Reilly as "a genuine legend" who starred for the club he loved.

"We all feel the loss of a true Hibernian great," the chairman told the club website.

Reilly remains the Edinburgh club's most-capped player and regarded by many supporters as one of the finest to play at Easter Road.

The term legend gets bandied about, perhaps too easily, but Lawrie was a genuine legend

He became the final member of that forward line after establishing himself in the team, making his debut in a win against Kilmarnock and then scoring his first goal for the club against Queen of the South.

He was inducted into the SFA Hall of Fame in 2005 and scored 22 goals in 38 appearances for Scotland.

"Our hearts must go out first to Lawrie's widow Iris and to his family," said Petrie. "Our thoughts are with them at this sad time.

"The term legend gets bandied about, perhaps too easily, but Lawrie was a genuine legend.

"He grew up as a Hibernian fan and he spent his entire career with the club he loved. He was undoubtedly one of the club's greatest ever players, revered by all who loved attacking and entertaining football. He was also one of Scotland's greatest ever strikers.

"Lawrie retained his lifelong passion for the club he graced as a player and was a regular attender at matches, a matchday host and was one of the club's Champions. He will be sadly missed."

Scotland manager Gordon Strachan said Reilly was one of the genuine greats of the game and one of his father's big heroes.

"I used to see Lawrie regularly when I went to Easter Road," said Strachan, who grew up a Hibs fan.

"He was a big hero of my father and has left us with some fantastic memories."

One of those was five goals against England and Strachan added: "Even though I met him so many times, he never mentioned that.

"It's a measure of how much a gentleman he was that he never mentioned that.

"Great players never tell you what they did - people already know. And he was a great player, that's for sure."