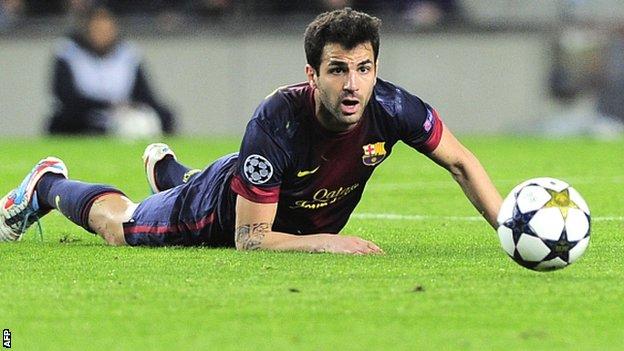 Barcelona have told Manchester United that Cesc Fabregas is not for sale.

United confirmed on Monday that they had submitted an improved bid - understood to be £30m plus add-ons for the midfielder - but reports in Spain claim that has been turned down.

"Fabregas is not for sale," a Barcelona source said on Monday. "The president (Sandro Rosell) has been very clear with Man United."

When asked whether he would give up on Fabregas were the deal to drag on, Moyes said: "I think a point does come but I think when you are interested in good players you want to give it every opportunity to materialise. And I'll do that.

"I'll hope that things can continue to try to move forward.

"At this moment I can only tell you that Ed Woodward (United's executive vice-chairman) is working hard to make the deals happen and we're hoping some of them will fall into place shortly."

United confirmed they had made a for the 26-year-old midfielder last Monday, with Woodward leading the negotiations.

"As I understand it, Ed had a response [to the first bid]," said Moyes at a news conference in Yokohama, Japan.

"We have made a second offer, but Ed is dealing with it rather than me."

Two days after United's initial offer was confirmed, Woodward returned from the Australia leg of their pre-season tour to attend to urgent transfer business.

Barcelona have not made any official comment, but the situation has reportedly been complicated by the managerial vacancy created at the Nou Camp by to step down because of ill health.

It is not clear whether has any bearing on the club's attempts to sign Fabregas.

The Spaniard came through Barcelona's La Masia academy before Arsenal signed him as a 16-year-old in 2003.

He developed as one of the Gunners' key players under manager Arsene Wenger before taking over the captaincy in November 2008.

Fabregas spent eight years with Arsenal, playing 303 games and scoring 57 goals, but returned to Barcelona in a worth £25.4m in 2011 and has helped them win the Copa del Rey in 2011-12 and La Liga last season.

He has played 96 times in total for Barcelona, including 60 league games, but has rarely featured in his preferred midfield role, with Xavi, 33, and Andres Iniesta, 29, ahead of him in the pecking order.

He has made 83 appearances for Spain, winning the 2010 World Cup and the European Championship twice.

In addition to Fabregas, United have a reported interest in Real Madrid forward Cristiano Ronaldo and Tottenham attacker Gareth Bale.

Left-back Leighton Baines and midfielder Marouane Fellaini, both of whom worked under Moyes at Everton, have also been linked with moves to Old Trafford - where the transfer record remains the £30.75m they paid Tottenham for striker Dimitar Berbatov in 2008.

But none of those moves have materialised as yet and when asked if he appreciated why some United fans were becoming anxious, Moyes replied: "I can understand that feeling.

"But there have been quite a few changes. Other managers have changed their clubs, too, and everybody thought this might be the summer when transfers are done later in the month.

"That was always the thought I had when I came into the club. You have to remember I only started on 1 July, so in truth I have only been in the job three weeks at this present time."