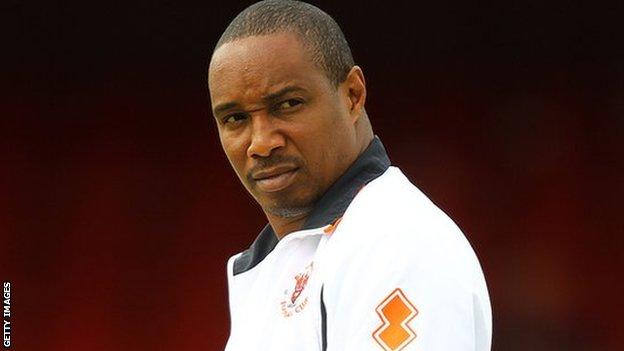 So small is Ince's current squad that he recently fielded a pre-season team made up entirely of trialists.

"Players have forever to decide whilst trying to get the best possible deal," he told BBC Radio Lancashire.

We are just getting nowhere. It is ridiculous that the season starts in two weeks and we literally have no recognised central striker

"We need a Football League deadline. It leaves managers no time to react and, no disrespect to them, but leaves me playing 11 trialists against Kendal."

Blackpool have experienced something of an exodus this summer with 14 departures from Bloomfield Road since the end of last season.

In May, the club confirmed 11 players would leave when their contracts expired whilst defensive trio Neal Eardley,Stephen Crainey and Alex Baptiste have moved to different Championship clubs.

"Obviously it has been a huge blow to lose three first-team defenders," Ince added.

"I'm confident that we'll keep hold of Gary Taylor-Fletcher as we're in deep conversation with his representative, but that would just be one of maybe eight or nine bodies that we need to get in the building.

"Being honest, things are still moving really slowly. It is worrying because most managers have the core of their squad sorted and are able to work on patterns of play for the season."

The Tangerines were boosted by Tom Ince's recent decision to turn down a move to Premiership club Cardiff City, whilst goalkeeper Mark Halstead, along with Scotland duo Barry Ferguson and Kirk Broadfoot, all agreed new contracts in the last six weeks.

But there have been only two new arrivals, Gary McKenzie joining from MK Dons and Bobby Grant signing from Rochdale.

"We are trying everything but the clock really is ticking and we are just not anywhere near at the moment," he continued.

"I mean it is ridiculous that there is two weeks until the season starts and we literally do not have a recognised central striker. Nathan Eccleston is the closest thing but he is not made for that role."