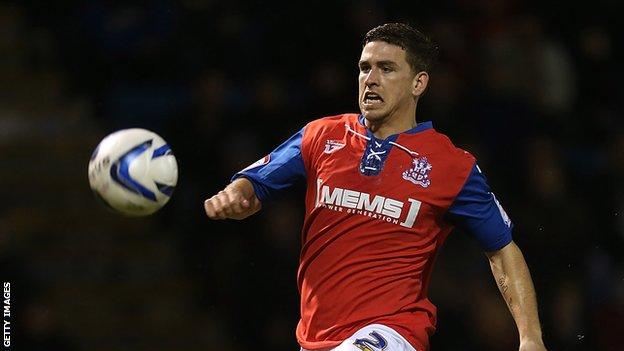 Gillingham boss Martin Allen has tipped striker Cody McDonald to have a successful campaign in front of goal.

The 27-year-old has joined the League One newcomers on a two-year deal after a short spell on loan last season.

"Cody loves it here and I love having him here. He will get 20-plus goals, there is no doubt about that."

This will be McDonald's third spell with the Gills, having scored 25 goals for the Kent club while on loan from Norwich in 2010-11.

The only time Cody McDonald has passed 20 goals in a single campaign was when he scored 25 in 43 games for Gillingham in 2010-11, when he was on loan from Norwich.

His next best tally is his eight goals in 31 appearances last season - four of which came in a seven-game loan spell at Priestfield.

Allen has praised the former Coventry man's attitude and willingness to learn since his permanent switch to Priestfield.

"You talk to him and he looks at you and you can see that he is listening.

"I say to him 'Are you sure and clear about everything I want you to do?'.

"He looks at me with his lovely eyes, like an owl. He has this attitude, he wants to know and he embraces it."

Meanwhile Allen says Conference Premier side Dartford have made a bid to take striker Adam Birchall on loan.

The 28-year-old scored once in 19 appearances for the Gills last season after returning from a long-term knee injury.

"The offer is to take him until 2 January," Allen said.

"I could keep him here but he will probably get frustrated. He needs to play games and go out and score goals.

"He was in and out of the team last year. More than anything, for his career, he needs a run of games to do what he does best.

"I had a chat with the chairman and I think it is good idea he goes out until January and then we review it."