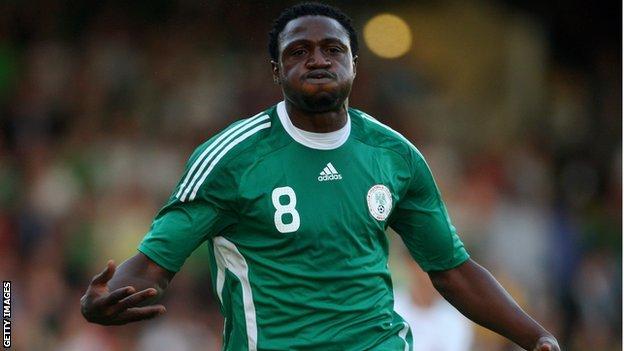 Nigeria's Michael Eneramo has completed a move to Turkish side Besiktas despite undergoing surgery on his right knee.

The 27-year-old has had surgery to repair a torn meniscus and will be out of action for up to three weeks.

"The club's project is good and I have joined one of the top teams in Turkish and European football," Eneramo said.

"When you're happy at a place it's difficult to leave. I love the football here and decided to stay despite interest from outside Turkey."

Eneramo who scored 36 goals for Sivasspor in two-and-a-half years at the club, also went onto deny media reports in his native Nigeria that he underwent a heart surgery.

"I only had a successful minor meniscus surgery and didn't undergo a heart surgery as reported back in Nigeria," he told BBC Sport.

"It didn't affect my move to Besiktas and I'm happy everything went well, hopefully I'll join my teammates at the pre-season training in three weeks.

"I have no clue where the story of heart operation came from. It has spread widely in Nigeria but that's not true."

The striker has made 11 appearances for Nigeria but has not played for since September 2010.

The last of his four international goals came in his last outing for the Super Eagles against Madagascar almost three years ago in Calabar.

But he has been overlooked by Super Eagles coach Stephen Keshi for the 2014 World Cup qualifiers so far and recent international friendlies.

While Eneramo accepts competition is fierce, he is confident he will get another chance on the international stage.

"Nigeria has talented strikers but I have to keep working hard and hope for a chance," he said.

"All I need to do is to keep scoring regularly and I believe that my time will come."