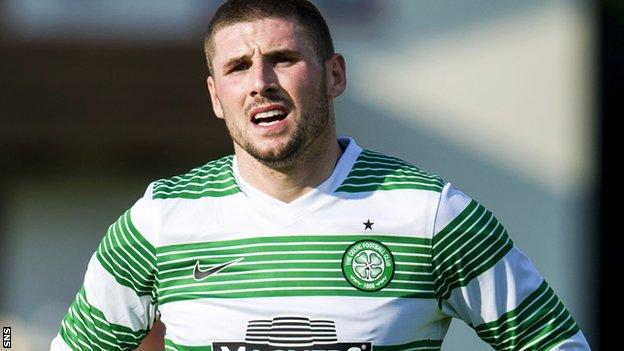 Celtic manager Neil Lennon intends to speak to striker Gary Hooper on Monday in a bid to clarify his future.

The striker has been the subject of bids from and Norwich City.

There is no word from Celtic about any bid being accepted, but Lennon said: "It is between Gary's representatives and the club in question.

"I hope to speak to him this afternoon. I haven't had a chance to see much of him in the last week or so with the games being in Belfast and London."

Hooper was still missing with a groin strain as Celtic defeated Brentford 2-1 in their latest pre-season friendly, but .

"For the time being, he's still a Celtic player and he's fit now and it's a great addition to have for tomorrow night," said the Celtic boss.

, who have since , and both had bids for Hooper rejected earlier this year.

The former Southend and Scunthorpe United forward has been Celtic's top scorer in each of the last three seasons.

During that time, he has helped the club win two Scottish Premier League titles, two Scottish Cups and, in 2012-13, reach the last 16 of the Champions League.

Lennon insists that he still has not given up hope of persuading Hooper to extend his stay at Celtic Park.

"I would like to, but his mind maybe elsewhere," he said.

"I will just make it clear that he's welcome here and we want him to stay.

"You never say never. If things don't go through or things are not agreed, he'll be here for at least another year anyway."

Lennon has already signed Amido Balde from Vitoria Guimaraes this summer but says his search for forwards would not end should Hooper decide to stay.

"We are looking to bring another striker in anyway to just beef up the attack at little bit," he said.

"Amido started to show really good signs of what he can bring to the team on Saturday - we were delighted with his performance - but we will look to add to that as well.

"I am looking at a number of positions still and we're hoping to get over the line with one or two players, but I can't give you a specific number."

Lennon did not hold out much hope to Nottingham Forest, who tabled a bid of £1.5m for central defender Kelvin Wilson.

"I'm not expecting him to go anywhere," said the Celtic manager. "He has two years left of his contract.

"There was a bid in from Forest on Friday and there's nothing more on it."