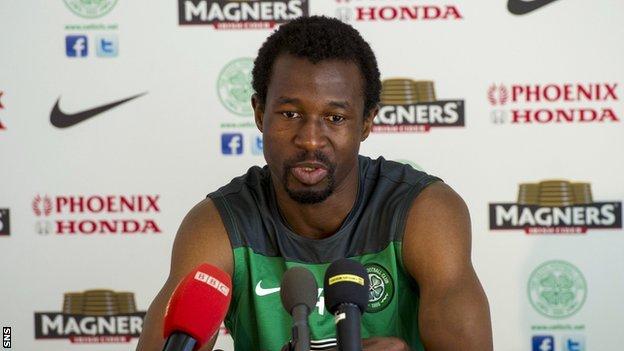 Efe Ambrose believes Celtic can reach the quarter-finals of the Champions League this season.

The Glasgow side made the last 16 of the tournament last term and are after having retained their Scottish title.

"We set the target last year and we want to do better this year," said Nigeria defender Ambrose.

"We can do even more than what we did last year if we put our mind to it and be determined to work harder."

Celtic recorded a famous victory over Barcelona in last season's group stage before losing to Juventus and went on to win a domestic league and Scottish Cup double.

Influential midfielder Victor Wanyama has been sold to Southampton, while top scorer Gary Hooper is also on the verge of a transfer to English football.

But, asked if Celtic retain a squad strong enough to at least match last season's European achievements, Ambrose said: "I don't think we have - I believe we have.

"We never rely on just two players. We rely on the whole team and the people on the bench."

"I believe in what the manager has seen in them and I believe they are good players," he said.

"That is why they are here. We can see the qualities of the players."

Lennon, though, was quick to dampen down any expectations Ambrose may raise among the Celtic support.

Celtic are in the third qualifying round. Lennon's side have a 3-0 first-leg lead over while Elfsborg are 7-1 up on Latvian outfit Daugava Daugavpils.

"It's a big ask," said Lennon of the possibility of reaching the last eight. "The short-term is to make the group stages and then take it from there.

"We have difficult games to navigate as we go along.

"I like the optimism, I like the ambition, but the reality is we are a long way off that just yet."