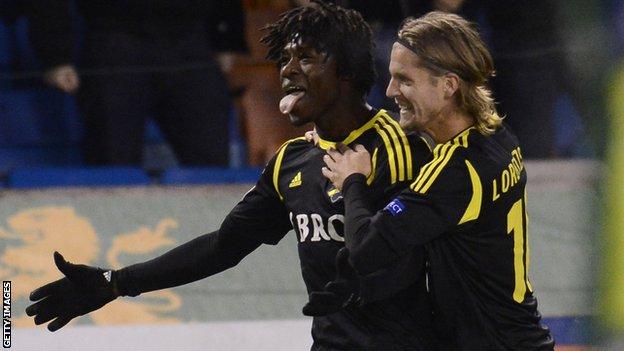 and the sides, who both lead their second qualifying round ties, have been

"We would prefer if he didn't play and I'm not going to change my stance on that either," said Celtic boss Lennon.

"He wouldn't be there if it wasn't for our relationship with the club."

on Tuesday while Elfsborg lead Daugava Daugavpils 7-1 after the Latvians' visit to Sweden.

The Swedish champions have suggested that, barring a major surprise in the second legs, Bangura should face Celtic in the third qualifying round.

But Lennon said: "He is our player despite what their manager is saying.

"We have spent a significant amount of money on him and we've loaned him out to get game experience.

"But it's an impossible situation for the player and we just hope that common sense prevails.

"We have a good relationship with Elfsborg. I think it's a very difficult situation for Mo."

Bangura joined Celtic from AIK for £2.2m in 2011, signing a four-year contract, but the injury-plagued striker made only 16 appearances, all but three from the bench, and failed to score during his time in Glasgow.

He returned to AIK on loan in August and then, in January, headed for Swedish top-flight rivals Elfsborg.

Asked what he will do should Bangura's two employers meet in the next round, Lennon said: "Me personally, I will probably speak to the player.

"But I'm not going to try to put any more pressure on him than he is already under.

"I think everyone knows what our feelings are about the situation.

"We're doing them a favour as well as them doing us a favour."

However, Lennon said he would not start thinking about the Elfsborg tie until after the second leg against Northern Irish champions Cliftonville.

"Should we get through the tie, we'll have them watched in the next few days," he said.