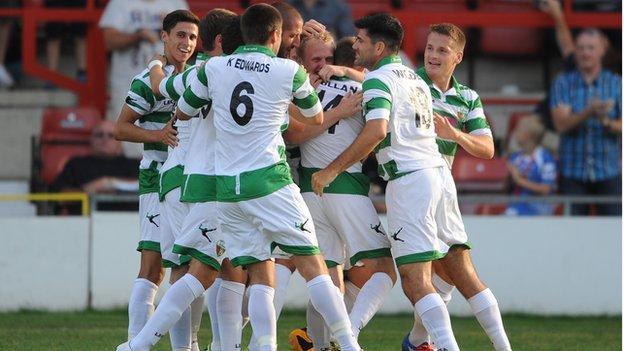 The New Saints director of football Craig Harrison insists that his side are still capable of causing a shock in Wednesday's Champions League qualifier against Polish giants Legia Warsaw.

TNS led at half-time against the Poles in last week's first leg at Wrexham's Racecourse Ground, only to go down 3-1.

Harrison believes it is vital for the Oswestry side to net first again.

"We have a hill to climb but, if we get an early goal, it's game on," he told BBC Radio Shropshire.

"It doesn't have to be an early goal, in fact. Just scoring any time would put a bit of pressure on.

"All we can do is go there looking to win the second leg."

It might have been a different story last Wednesday night if Alex Darlington's stunning shot had not hit the post after Ryan Fraughan had put the Welsh Premier champions ahead on 11 minutes.

"They've got that much quality, they score out of nothing," admitted Harrison.

"I don't think they have a non-international player on the pitch. But it was small margins that cost us in the first leg."

Having played in front of 2,925 fans at the Racecourse Ground, TNS, who pull in crowds of just over 300 on average at their Park Hall home, now find themselves taking on the Poles at the newly-renovated 58,000-capacity Polish Army Stadium.

Since the then Shropshire/Wales border village side Llansantffraid played their first European tie in 1996, the Saints have only won two ties in 17 attempts - both against Irish opposition, Bohemians three years ago and Cliftonville a season later.