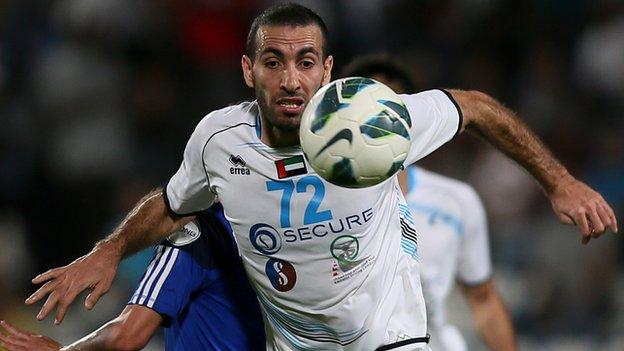 Mohamed Aboutrika equalised for Al Ahly to earn them a 1-1 draw in their Champions League tie with rivals Zamalek.

Zamalek had taken the lead with only eight minutes played when Ahmed Gaafar slotted into an empty net following a goalmouth scramble sparked by a fumble from goalkeeper Sherif Ekramy.

All four teams in Group A are tied on one point each after Orlando Pirates of South Africa and AC Leopards of Congo Brazzaville drew 0-0 last weekend.

The match between the Egyptian rivals was played at the Red Sea resort of El Gouna, switched from Cairo because of security fears due to unrest following the ousting of President Morsi.

It had been expected that the match would be played behind closed doors but Egyptian security forces made the decision to allow about 7,000 supporters into the 12,000-capacity stadium.

The Confederation of African Football had warned before the game that "the presence of any supporters in the stands means a violation that would require a sanction against the home side (Zamalek)".

But Caf will not take action the club because the decision to admit fans was taken by the country's security forces, rather than by the clubs.

And the atmosphere was more like a carnival rather than tense with some fans using red and blue umbrellas to shield the mid-afternoon sun, and hundreds of balloons added to the colourful occasion.

Zamalek went ahead when Ekramy failed to collect an angled free kick and although he blocked two goalmouth attempts, Gaafar fired home.

The football was typically cagey as Ahly gradually established a territorial edge, but the record seven-time African champions took 27 minutes before threatening to score.

Close passing created a chance for Aboutrika and when goalkeeper Abdel Wahed El Sayed failed to hold his stinging shot, the ball was scrambled clear.

Aboutrika, back in the all-red Ahly strip after a short loan spell with a United Arab Emirates (UAE) club, lifted a close, curved free kick over the wall soon after, but it landed off target.

As pressure mounted on the Zamalek defence, striker Ahmed Abdel Zaher just failed to connect with a low Ahmed Fathy cross and the Algerian referee ignored claims for an Ahly penalty.

But the Red Devils did not need to appeal seven minutes after half-time as Zaher was sandwiched by two defenders and Aboutrika placed the spot-kick into the corner of the net.

Zamalek reacted by introducing star playmaker Mahmoud 'Shikabala' Abdel Razak, who returned to the 'White Knights' eight months after being freed by a UAE club.

Ekramy almost blundered again by reacting very slowly to a ball drifting into his box, but Gaafar could not take advantage and the ball was hastily booted out of the danger zone.

As time ticked away the teams became increasingly cautious, and the threat from a stoppage-time Zamalek free-kick failed to materialise as it was over-hit and trickled wide.