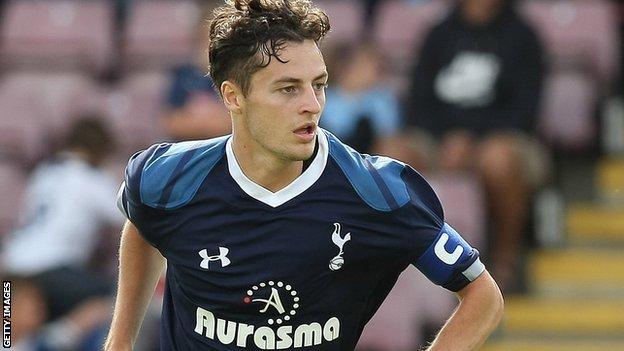 Swindon Town have signed Tottenham midfielder Ryan Mason on loan for the 2013-14 campaign.

The 22-year-old becomes the fourth player from the Premier League club to join Town on loan this season.

Mason will link up with team-mates Massimo Luongo, Grant Hall and Alex Pritchard at the County Ground.

Swindon have now had eight Tottenham players on their books, either on loan or permanently since the start of the 2012-13 season: John Bostock, Nathan Byrne, Massimo Luongo, Dean Parrett, Grant Hall, Jack Barthram, Alex Pritchard and Ryan Mason

Football League regulations state no club may sign more than four loan players from another club in any season, although an additional youth loan player may be added to this figure.

The association between the two clubs has formed from Swindon director Lee Power's friendship with Tottenham youth co-ordinator Tim Sherwood.

Mason made his Spurs debut in the Uefa Cup as a substitute in 2008 before making his first start in the 3-0 win over Carlisle in last season's Capital One Cup.

He has made four appearances in total for his parent club and has previously had short-term spells at Yeovil, Doncaster and Millwall.