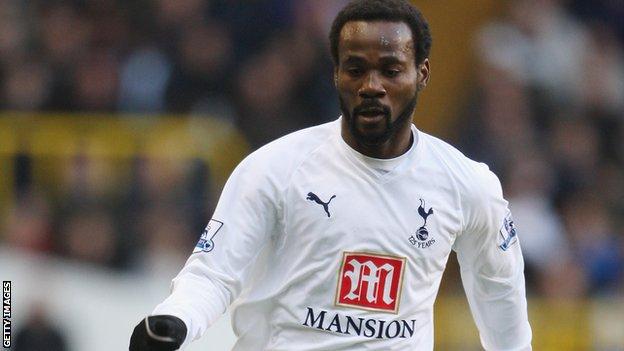 Ex-Premier League player Pascal Chimbonda is set to feature for Market Drayton in a pre-season friendly.

The 34-year-old ex-France defender will play for the Northern Premier League Division One South side against Notts County at Greenfields on Wednesday.

The former Tottenham, Sunderland, Wigan Athletic, QPR and Blackburn Rovers right-back is without a club having left Doncaster Rovers over a year ago.

Who is Lee Ebden?

Market Drayton Town manager Lee Ebden is one of the youngest football managers in the country, aged 29

Hutchings had his biggest success in management as assistant to Paul Jewell at Bradford City and Wigan.

He later went on to manage both clubs, before taking caretaker charge of Derby County following Jewell's sacking at Pride Park in December 2008.

Hutchings, who spent two years as manager of Walsall until January 2011, most recently had a spell as caretaker boss at Ipswich Town last season.

Jewell took Chimbonda to Wigan from French side Bastia in 2005, before selling him to Spurs for a reported £4.5m just one year later.

Chimbonda said on Twitter: "Game tomorrow with Market Drayton. I thank them for letting me have a fitness game. Will be a very interesting game against a League One team."