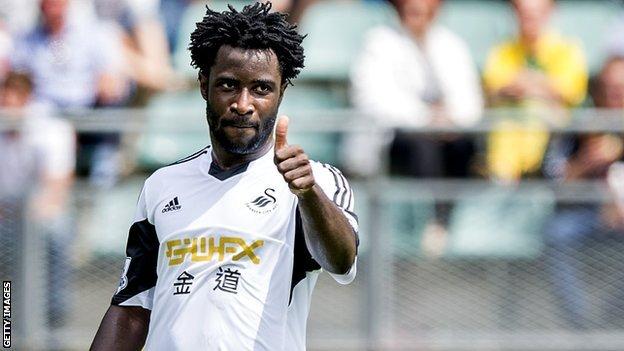 Swansea City's record £12m signing Wilfried Bony has been granted a work permit, allowing him to complete his move from Vitesse Arnhem.

The striker, 24, is expected to join his new team-mates for training on Thursday and could feature in Saturday's friendly at Reading.

He's good in the air. That's given us something extra

The Ivory Coast forward made his debut in a 1-0 pre-season win over Den Haag.

Bony scored 31 goals in 30 league games last season and was named Dutch footballer of the year.

Manager Michael Laudrup believes Bony, who has signed a four-year contract, can offer Swansea "something extra", particularly from set-pieces.

"He's a goalscorer, you can see how strong he is," said Laudrup.

"He's good in the air. That's given us something extra as well, to see if we can score some set-pieces."

West Ham also made an offer for Bony, but Swansea secured his signing with a higher bid.

"We still have some games and he will have to know his team-mates some more, like the rest of them," Laudrup said.