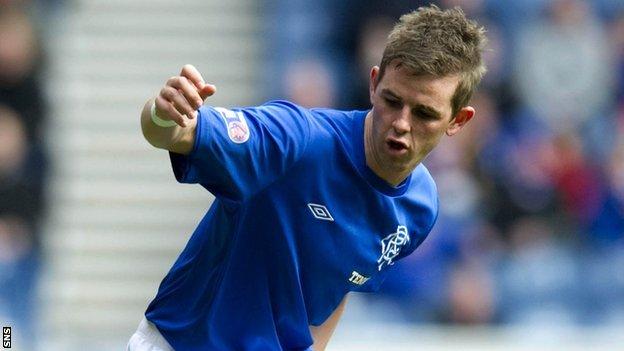 David Templeton admits he knew his Scotland career would probably be put on hold until Rangers return to the top flight before joining the Ibrox club.

The winger switched from the Scottish Premier League with Hearts to help the Glasgow outfit win Division Three.

"When I signed here, I gave up all hope on the Scotland squad for the first few years," said 24-year-old Templeton.

"If we do get back to the top level, and I'm playing regularly, maybe then I'll get a sniff."

But Templeton, who represented his country at under-19 and under-21 level, is surprised that club-mate Lee Wallace has missed out on the chance to face England next month.

The Rangers left-back has been called up by Gordon Strachan in the past, while playing in the bottom tier, but failed to make .

"Lee has been consistent for years now and I'm quite surprised he is not in the squad just now," said Templeton.

"I think he's good enough to play for Scotland. Not a problem.

"It's unfortunate for him that he's not been called in."

Templeton has the added frustration of being out of action for Rangers as well at the moment as he recovers from a thigh injury.

However, he has targeted a return to action in a friendly against Newcastle United at Ibrox on 6 August.

It means he will be missing as Rangers' competitive campaign begins this weekend when they .