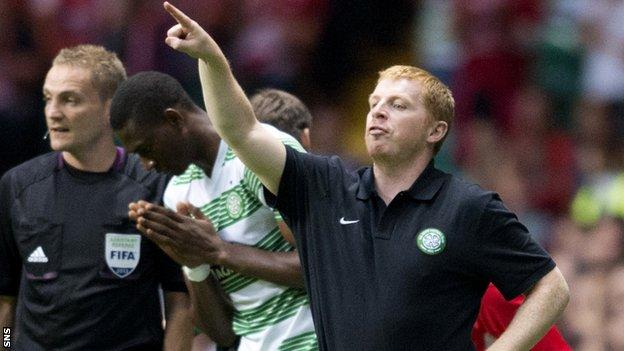 But he dismissed as "just speculation" reports that it would be Wolves striker Kevin Doyle.

"That's the main thing we are looking at now - trying to add to the squad, predominantly before Thursday if we can," Lennon told BBC Scotland.

Asked, following the , what those positions might be, he replied: "Striker, midfield, left-back - because Emilio Izaguirre could do with a rest now and again - and maybe a left-sided player as well."

I would like Gary Hooper to stay, obviously. I don't know if that'll happen, but we'll work away in the background and try to persuade him to stay

Lennon picked out the transfer of Kenya midfielder Victor Wanyama to Southampton as leaving a particularly large gap in his squad.

"We've let a lot of players go and sold one, obviously our biggest one, so we need to reinforce the squad a little bit because injuries are biting us a little at the minute as well," he said.

Midfielder Joe Ledley and defenders Adam Matthews and Charlie Mulgrew are continuing their recovery and could play in Saturday's friendly against Borussia Moenchengladbach.

"Joe, Adam and Charlie have all trained this week and we're looking to get them some football at the weekend," he said.

"Elfsborg might be too early for that, but it's good to add a bit of quality to the squad for next week."

Lennon remains hopeful that striker Gary Hooper, who returned from his groin strain to play from the bench in the 2-0 second-leg win over Cliftonville, will still be a Celtic player for the third qualifying round first leg.

It would appear that Celtic have given the 25-year-old permission to talk to a bidding club, believed to be QPR.

"There's been a bid in from a club," said Lennon. "His representative has been speaking to the club and nothing's been confirmed.

"I would like him to stay, obviously. I don't know if that'll happen, but we'll work away in the background and try to persuade him to stay if we can.

"He came on tonight and looked bright and it's good to see him back on the pitch.

"I think we're a stronger Celtic with Gary Hooper in the squad next week than not."

Meanwhile, Lennon was pleased with his side's performance despite failing to produce the comprehensive win many Celtic supporters had been expecting.

"We had all the play," he said. "We had 30 attempts on goal. Our shooting could have been a little bit better at times, but it is important to win the game.

"I'm glad I started with a strong team because that's another good 90 minutes of work under their belt and I'm hoping it'll set us up for Elfsborg.

"That'll give us another week to prepare for that, so some of the guys will play at the weekend as well and get some more games into them."