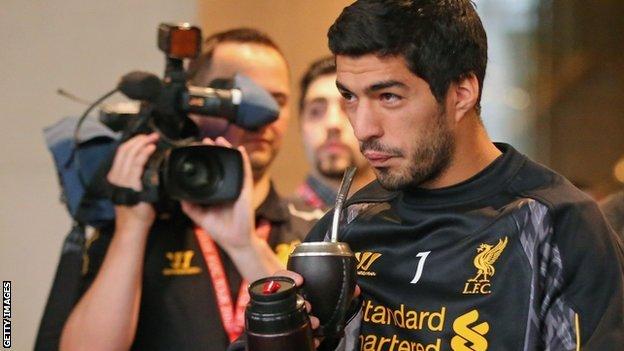 Liverpool owner John W Henry has asked what "they're smoking" at Arsenal after rejecting the Gunners' improved offer of just over £40m for Luis Suarez.

The unusual bid of £40,000,001 was designed to trigger a clause in the 26-year-old Uruguay striker's contract.

Under the terms of Suarez's deal, Liverpool must inform him of the bid but do not have to accept it.

Henry tweeted: "What do you think they're smoking over there at Emirates?"

It is unclear whether Henry is talking about Arsenal's attempts to sign Suarez or their valuation of the player.

While they remain determined to keep their prized asset, who scored 30 goals for the club in 44 appearances last season, their resolve is likely to be tested if the bidding continues to rise.

Should Arsenal persist and have an improved bid accepted, it could come close to trebling their previous highest initial outlay on a transfer.

The Gunners, whose first offer for Suarez was £30m, paid a reported £15m to Zenit St Petersburg for Andrey Arshavin, in January 2009.

Liverpool manager Brendan Rodgers last week said he considered Suarez to be at least as valuable as Edinson Cavani, who recently joined Paris St-Germain for £55m.

Real Madrid remain interested but have yet to make a formal offer.

Suarez joined Liverpool's pre-season tour of Australia at the weekend and was expected to hold talks about his future with Rodgers.

The Uruguay international flew to Melbourne from Montevideo on Sunday after being given extended leave by the Reds following the Confederations Cup.

He wants to leave Anfield to play for a Champions League club despite only signing a new long-term deal last summer.

Speculation has grown about Suarez's future since he was punished with a 10-game ban at the end of April for biting Chelsea's Branislav Ivanovic.

The striker still has to serve six games of that suspension and was also banned in 2011 after being found guilty of racially abusing Manchester United's Patrice Evra.

613 comments
Back to top
unknown