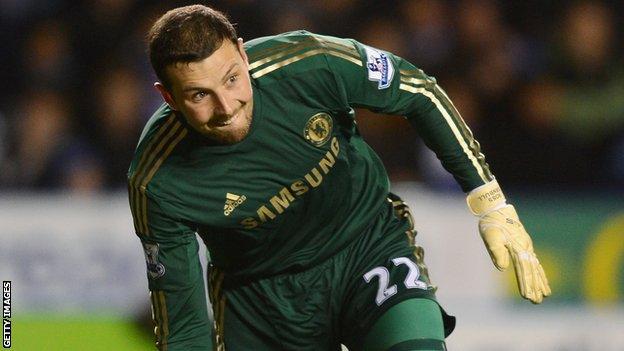 Middlesbrough manager Tony Mowbray says there is a possibility that goalkeeper Ross Turnbull could return to the club.

The 28-year-old has been with Boro since his release by Chelsea and played in the 3-2 friendly win over Rotherham.

However, Mowbray told BBC Tees that any deal depended on reserve keeper Jason Luetwiler moving on.

"If Luetwiler was to go out on loan then we'd need another goalkeeper to cover so that would be the only option," the Boro boss said.

"There's a few things going on in the background. I spoke to Luetwiler about going out on loan and testing himself as he went a whole season last year and didn't play in our team - he played one cup game, I think.

During his first spell at Middlesbrough, Turnbull made 29 starts over seven years as deputy to Mark Schwarzer

"He's [Turnbull] been in training for a couple of weeks. He's without a club and that's all we should read into it at the moment.

"It's a pretty decent option for cover, an experienced goalkeeper who's been at Chelsea."

Turnbull came through the youth system at the Riverside, but left Boro in 2009 to join Chelsea on a free transfer.

The former England Under-19 international only made 16 starts during his time at Stamford Bridge as back-up to first-choice Petr Cech.

Mowbray also revealed that moves to bring in striker Eduardo Vargas and midfielder Vitor looked to have stalled, despite Scott McDonald's departure to Millwall.

"They are probably players that have been on the radar and drifted for whatever reason and they are players that we've had certain discussions with," he added.

"There are still other players that we're looking at and talking about and hopefully in the next week we'll have some additions.

"We have an 11 that I feel can be very competitive, but of course, we need to add some more players, and some more quality, for when the injuries and suspensions come."