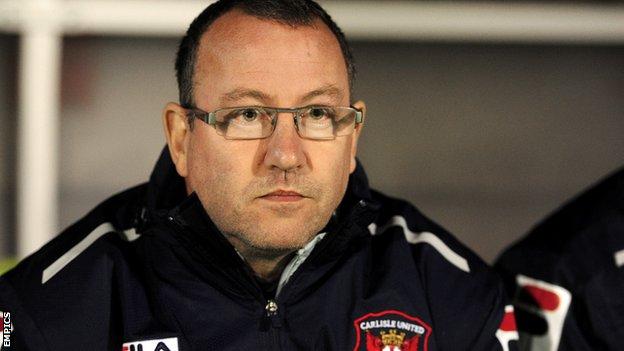 Carlisle manager Greg Abbott believes they must improve results this season to bring back fans back to the club.

After winning the Football League Trophy in 2011 and narrowly missing out on a play-off place in 2012, the Cumbrians finished 17th last season.

"We're going to work even harder to get off to a good start, win back the fans that have gone missing and have a successful season," said Abbott.

Managing director John Nixon recently expressed concern at the falling attendances at Brunton Park, with gate takings representing about 35% of the club's income.

Abbott will again have to work within a tight budget over the upcoming season, but the 49-year-old said it was a situation he accepts.

"I'm used to having not much money to spend in summers," he told BBC Cumbria. "I don't want to disclose what we've paid for some of the players, but it is a lot lower than other clubs have been paying.

"What we're getting is a group who are buying into what we want to do and a group who want to be here.

"We've got a lad here from Manchester United [Reece James] who wants to be here for the time being and to learn his trade and if they want to do that, we'll help them any way we can."

Abbott expects a deal for former St Mirren striker Lewis Guy to be completed by the end of the week after his spell on trial.

"I think verbally we've both agreed on something so hopefully it is all but done," he said.