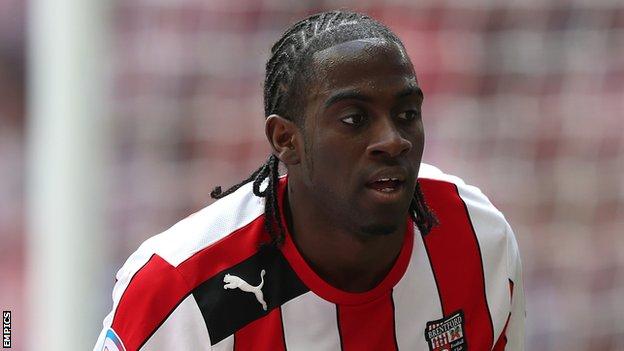 Clayton Donaldson thinks Brentford will challenge for promotion again after bolstering their squad this summer.

The Bees were beaten in the League One play-off final last season.

The 29-year-old striker told BBC London 94.9: "Most people have lost a few players and I can't see anyone who has strengthened as much as we have.

"We have kept most of the squad intact and that will stand us in good stead. We have got every chance of getting that promotion this year."

Bees manager Uwe Rosler has been busy in the transfer market, bringing in seven players, including midfielder Alan McCormack and former Walsall striker Will Grigg, while Harry Forrester has been the only high-profile departure from Griffin Park.

Donaldson believes the west London side will come back stronger following their play-off defeat to Yeovil, which came after the side missed out on automatic promotion on the last day after failing to convert a stoppage-time penalty.

"I think everyone has come back hungrier after what happened last year," he said.

"From coming so close to getting promoted I think everyone knows what it takes now and everyone is pulling together. We were so close and I think we deserved to go up.

"We have come back this season knowing we have got a good enough squad to go and get promotion."

Meanwhile Donaldson says he is fully committed to the club after being the subject of transfer speculation over the summer.

The former York and Crewe man, who scored 24 goals last season, has been linked to Wolves and Barnsley, amongst others.

"After scoring 20-plus goals you are going to have little links here and there," he said.

"It's normal. People in the press try and guess that you might be going here or there and that someone's looking for a striker.

"It's all speculation and I'm old enough and wise enough to try and let it go over my head.

"I'm happy as a Brentford player and still enjoying my football. I'm just focused on getting my fitness up and starting the season."