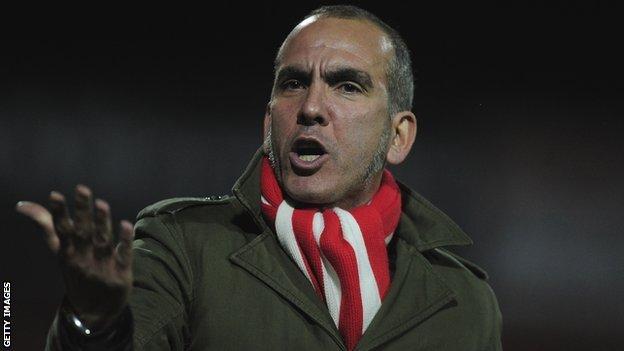 Swindon have reached an out-of-court agreement with Paolo Di Canio after he accused the club of breach of contract.

The 45-year-old, who is now Sunderland boss, quit Swindon in February saying his position as manager was "untenable" because of off-field events.

At the time, the League One club were in financial difficulty and in the process of being taken over.

The two parties were due to attend an employment tribunal on Friday, but a settlement has now been agreed.

A Swindon spokesman said they wished Di Canio "every success in the future" and the club would now "continue to concentrate on preparations for the new season".

News of the settlement came with the Italian in Hong Kong, where Sunderland beat Tottenham 3-1 in a pre-season friendly on Wednesday.

Di Canio had a successful 21-month tenure at Swindon, leading them to the League Two title in 2011-12 season, as well as the Johnstone's Paint Trophy final, but his fractious relationship with the board eventually led him to leaving his job.

It was revealed in January that Swindon's then owner, Andrew Black, had put the club up for sale and stopped investing money, leaving the County Ground outfit on the verge of administration.

A consortium - fronted by current chairman Jed McCrory - agreed a deal to buy the club on 30 January, but it took until 21 February for it to be approved by the Football League.

With the club desperate for immediate funds, they sold star winger Matt Ritchie to Bournemouth for £500,000.

It was a move which angered Di Canio, who claimed the winger was sold behind his back, and two weeks later he quit his role because of what he claimed were "broken promises" from the board.

Former Aston Villa coach Kevin MacDonald succeeded him as manager, but lasted only four months before leaving and Mark Cooper is now in temporary charge while the club seeks a successor.