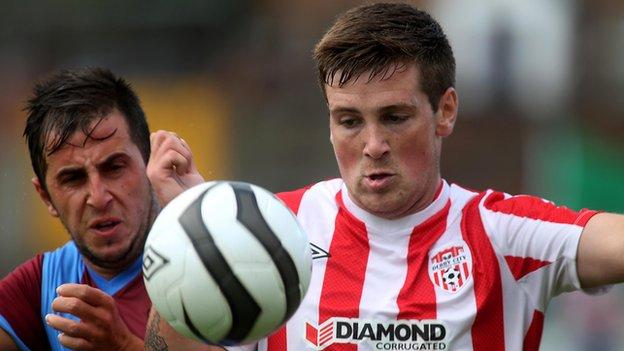 Derry City were sent crashing out of the Europa League as Trabzonspor ran out clear winners at the Brandywell.

Paulo Henrique scored a second-half brace to put the tie beyond doubt before substitute Abdulkadir Ozdemir added a third in injury time.

The scoreline was harsh on Declan Devine's men who twice went close through Ruaidhri Higgins headers before Henrique broke the deadlock.

The Turkish side progress 7-2 on aggregate to face Dinamo Minsk.

The Belarusians saw off Lokomotiva Zagreb on away goals to reach the third qualifying round.

The home side had surprisingly dominated the first half against the strangely subdued Turkish Super Lig outfit, and created an excellent chance to reduce the two-goal deficit.

Higgins played a stunning ball to Eoghan Osbourne on the left and got on the end of the full-back's deep cross, but his header was well saved by Onur Kivrak.

Two minutes before the interval, Derry were cut open for the first time and had Simon Madden to thank for an excellent goal-line clearance.

Polish international Adrian Mierzejewski sent Volkan Sen racing clear, and with his goalbound shot having cannoned off Gerard Doherty, Madden was on hand to hook clear.

After Higgins had a looping header tipped over by Kivrak from a Paddy Kavanagh corner, Trabzonspor - featuring five full internationals in their starting team - killed off the tie in the 56th minute.

The ball broke to Mierzejewksi after a scramble on the edge of the area, and his scuffed shot fell to Henrique to stroke into an empty goal.

With the Candystripes pushing for an equaliser, Sen got in behind Osbourne on the right and crossed for the outstanding Henrique to drive a low shot past Doherty after 81 minutes.

In stoppage time, Henrique turned provider to tee up substitute Ozdemir - the Turkish international making no mistake with a fine strike into the bottom corner from 20 yards to complete the rout.