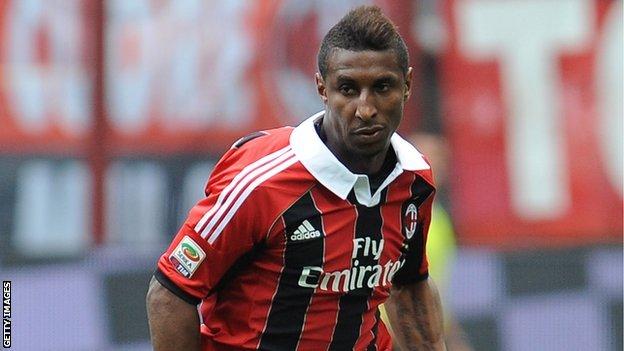 AC Milan midfielder Kevin Constant walked off the pitch during a pre-season tournament match against fellow Serie A side Sassuolo on Tuesday in response to alleged racist abuse.

The 26-year-old Guinea international kicked the ball into the crowd and left the pitch in the 34th minute.

Milan sent on a substitute, and an announcement warned the game would be stopped if further incidents occurred.

A statement from FIGC read: "The Federal Prosecutor's Office has opened an investigation to ascertain the extent of the racist incident that took place at the Stadio del Tricolore in Reggio Emilia during the Milan-Sassuolo match, which saw AC Milan player Kevin Constant the subject of chants from some supporters in the stands."

The Ghana international sparked a walk-off during AC Milan's match against Italian lower division club Pro Patria by picking up the ball midway through the first half and kicking it into the crowd before removing his shirt - he was then followed off by both sets of players and officials.

While Boateng had plenty of backing, it appears that Milan are less supportive of Constant's decision to leave the field.

The club said in a statement: "This was not a decision he should have taken upon himself to make.

"Despite his more than understandable reasons and the anger he must have felt, AC Milan would like to remind everyone that the only people responsible for intervening against any manifestations that offend the human dignity, which includes racial discrimination, are the referee in charge of the match and the head of public safety."

However, the statement added that racism deserves "zero tolerance".

In May, Fifa announced new measures to tackle racism, declaring that teams could be relegated or expelled from competitions for serious incidents of racism as a result of tough new powers.