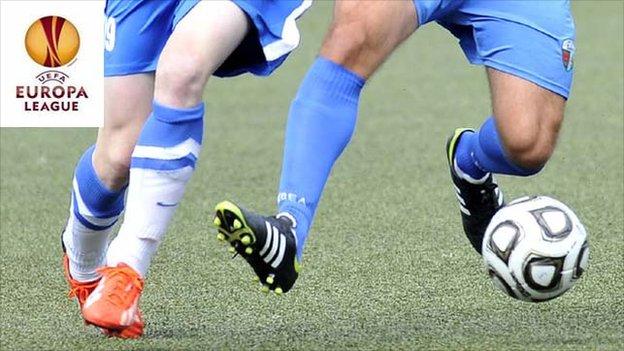 Prestatyn bowed out of the Europa League with defeat against Rijeka in the second qualifying round second leg at Rhyl.

Trailing 5-0 from the first leg, Prestatyn fell further behind when Ivan Mocinic scored with a curled effort from outside the box.

Ivan Boras added a second before the interval, slotting past Jon Hill-Dunt.

Goran Mujanovic added a third for the Croatian side, who face Zilina in the next round.

Welsh Cup winners Prestatyn were appearing in European competition for the first time in their history.

They advanced to the second qualifying round after victory over Latvian side Liepajas Metalurgs in the previous round.

"We massively improved on what we did last week. We knew we were up against a very good side but we came up with plans and strategies to limit the effect they would have on the game.

"We're disappointed with two of the goals we gave away in the first half but we thought we improved drastically on last week.

"What we take out of it [European campaign] is that in the first tie against the Latvian team [Liepajas Metalurgs] we fully deserved to come through the tie. We were the better team in my opinion over the two games.

"We deserve to be at this level and if we can perform how we did last season and improve on it with some of the signings we've made, hopefully we can be a force in the Welsh Premier League this season and make these European evenings more of a regular occurance for Prestatyn Town football club."