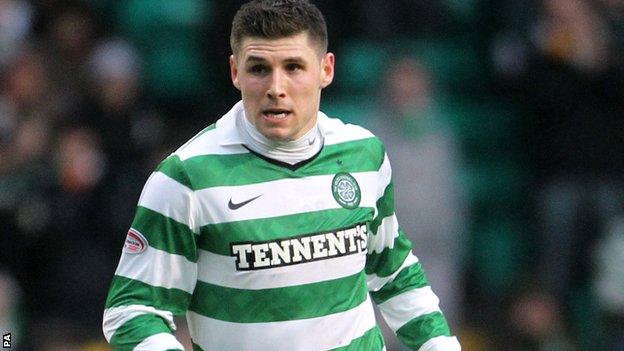 Manager Harry Redknapp thinks Gary Hooper can score the goals to ensure a quick return to the Premier League for Queens Park Rangers.

Celtic have accepted a bid in the region of £5m from the Championship club for the 25-year-old.

"It looks like it's on its way to being done," Redknapp told BBC Radio Scotland. "Negotiations have gone well.

"He's a finisher. He'll score goals in the Championship, I'm absolutely certain of that."

Hooper, who was used as a substitute in Tuesday's Champions League qualifying win against Cliftonville, scored 31 goals for the Scottish champions last season.

Having moved to Glasgow from Scunthorpe in a £2.4m deal, the striker has been Celtic's top scorer in each of the last three seasons and has one year remaining on his contract.

"He's in the last year of his contract, so it's a good deal for everybody. It's good for Celtic to get the kind of money they are getting and hopefully it will be a great deal for QPR.

"If he can come here and get 25 goals next season, then we will have a real chance of getting out of the division.

"I think Gary is capable of reaching that sort of target.

"We're going to need two strikers and I think they are going to have to weigh in with 50 goals."

and have both had bids for Hooper rejected this year and the centre forward turned down the chance to extend his stay at Celtic Park.

"I get the feeling that he really wanted to come back down south to the London area," Redknapp said about the striker, who grew up in Harlow, Essex. "He seems very much a family man - that was a factor."