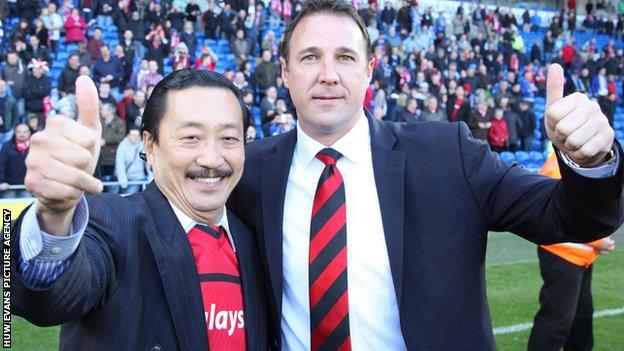 Malky Mackay says the wiping out of Cardiff City's historic debt is a major boost to the club.

Owner Vincent Tan said this week he had reached an agreement with the Langston Corporation to pay off a multi-million pound debt dating back to 2006.

Former chairman Sam Hammam has returned to the club as part of the deal.

"For our owner to take his plans forward now with a clearer picture massively helps the football club," said Mackay.

Mackay led the Bluebirds to the Championship title last season as the club claimed a place in the Premier League for the first time.

He said the agreement over the estimated £24m owed to Langston, a Swiss-based company, did not mean he would have more money to buy players for the new season, but would give the club a firmer foundation.

"I had a plan that I was working to and this doesn't affect that," said Mackay, who failed to convince Tom Ince to join from Blackpool after an £8m offer was accepted.

"We were relaxed as to the plans the owner's got.

"They're all things that we've actioned and are happening."

The deal with Langston, announced on Monday, clears a debt dating back to the time Hammam owned the club.

As part of the settlement, the Lebanese businessman - who acted as a spokesman for Langston - was made honorary president of Cardiff City.

And he has called for fans - many of whom were upset by Vincent Tan's decision to change the club's colours from blue to red - to give their full backing to the Malaysian owner.

On the field, Mackay was happy to see record signing Andreas Cornelius mark his debut with a goal in the 4-3 pre-season friendly win at Forest Green Rovers.

"I thought he did fantastically well, he's got a good touch and he's an international footballer," he said.

"I thought he had some good movement, good touches and he took his goal very well obviously."

Cornelius, signed from FC Copenhagen for £7.5m, was joined on the scoresheet by Peter Whittingham, Nicky Maynard and Craig Noone against Conference side Forest Green.