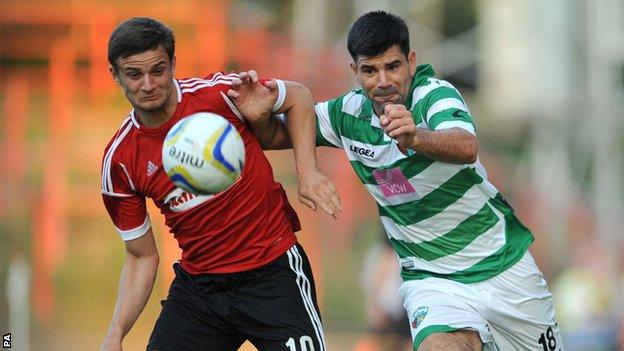 The New Saints are making headway in European competition, according to striker Mike Wilde.

The Welsh champions were in the second leg of their Champions League second qualifying round tie.

"If we'd put that performance in against anyone else at this stage then we'd be going through to the next round," Wilde said.

"I think our players are very underestimated.

The Saints were trailing 3-1 going into the second leg in Warsaw but withstood a barrage from the home team, with Wladimer Dvalishvili's 53rd-minute goal the difference between the teams on the night.

In truth the Polish side could have won more comfortably, having hit the cross bar and seen a shot cleared off the line in the dying minutes.

But TNS also had chances - the best of which fell to Wilde in the first half.

"I think it was a little bit too long on the cross really," he said.

"I managed to lose my marker in the box and it was just unfortunate really that I didn't wrap my head around it.

"But all-in-all the lads were very pleased with the performance that we put in over the 90 minutes and the first leg as well."

Midfielder Christian Seargeant said the atmosphere at the Polish Army Stadium was the best he'd encountered in the club's European matches.

And he added that the players appreciated being given a standing ovation by the home fans on the final whistle.

"It's the best I've ever come out against," he said.

"I think there were a few more in Anderlecht the other year, but this was a lot more hostile. It was mad."