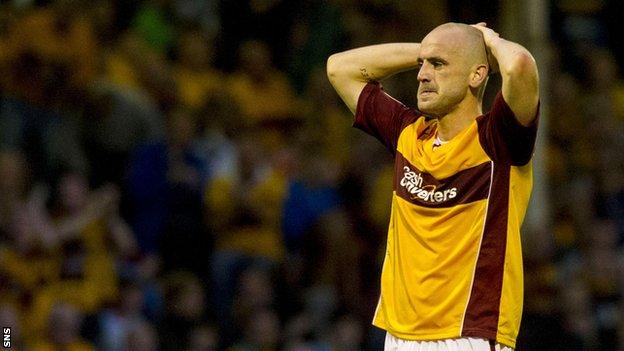 Motherwell face an uphill task to stay in the Europa League after Ivelin Popov's brace put Kuban Krasnodar on course for the play-off round.

The Bulgarian twice finished from Ibrahima Balde passes in the second half to give the Russian side a healthy first-leg advantage.

Balde had earlier rattled the frame of the goal with a 25-yard strike.

John Sutton almost pulled one back for the hosts when his header came back off the post in injury time.

But the result means last season's Scottish top-flight runners-up will need to score twice in next Thursday's return leg at the Kuban Stadium to keep the third qualifying round tie alive.

After feeling their way into the match, the visitors began to control possession and perhaps should have scored with their first attack.

Stephen McManus missed a long ball, letting Balde in on Lee Hollis but the Senegalese striker lifted his shot wide.

Visiting manager Dorinel Munteanu had selected Balde ahead of summer signing Djibril Cisse and the striker's pace and poise continually tested the concentration of Motherwell's defence.

A curling shot by the 24-year-old just cleared the crossbar before his next effort from distance rebounded back of the right-hand post.

Stuart McCall's men were struggling to reverse the pattern of play, although Belemov looked less than comfortable when dealing with a high ball as he was fouled by Iain Vigurs.

That incident followed home calls for a penalty when Sutton went down in a crowded penalty area, referee Alan Bieri unconvinced there had been any infringement.

Kuban's determination to take a lead home for the second leg finally told in the opening minutes of the second half.

Balde's driving run from the left took him past his marker and the low cut-back was forced home by Popov.

James McFadden had few opportunities to make an impact on the game and his first effort of the match was deflected wide of the Kuban goal before Vigurs sent a couple of volleys into the hands of Belemov.

But just as Motherwell were gaining momentum Kuban produced a clinical counter-attack to all but finish the tie.

A corner from the hosts was cleared and Balde raced clear on the right before squaring for Popov to fire past Hollis.

Cisse soon replaced Balde and the former Liverpool and QPR forward had a chance to score when played in by Charles Kabore but Hollis made a fine block.

Motherwell fans rose to celebrate in the dying seconds as Sutton jumped to meet a cross, but he and the home crowd were left distraught as the ball came back off the upright.