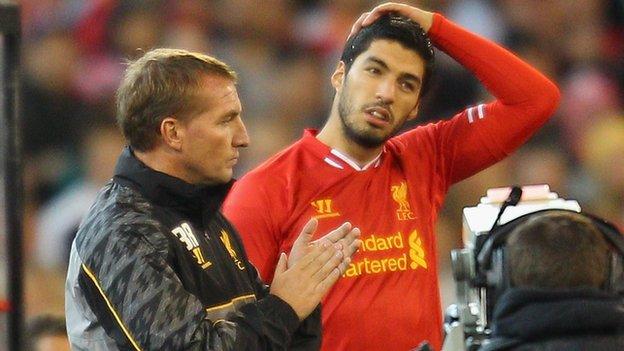 Arsenal are not "anywhere near" matching Liverpool's valuation of striker Luis Suarez, according to Reds manager Brendan Rodgers.

Liverpool rejected an Arsenal club-record bid of £40m plus £1, but Suarez wants to talk to the London club.

The approach triggered a clause in his contract that means he has been told of the bid and can now talk to Arsenal.

"The fans, the managers, his comrades, the hierarchy have been loyal to him and they've done everything in their powers possible to back him up, and he's basically put a custard pie in everyone's face.

"Liverpool deserve a little bit better and he's just thrown one excuse after another to try to force his way out of Liverpool.

"Everyone says the fans are fantastic and they've proved that with the way they have backed Luis, and he has treated them with contempt in his inconsistency with his talk, so yes I am very disappointed."

"If Arsenal want the player they have to produce the value for the player," Rodgers told the Liverpool Echo.

"There was an offer a few weeks ago of £35m and two weeks later it is now £40m and £1. I don't think it is anywhere near the value of what he is worth.

"It is two-fold really. A player may want to go, but then somebody has to pay the value or worth of that player."

On Wednesday, Suarez made his first appearance for Liverpool since his infamous bite on Chelsea defender Branislav Ivanovic's arm last season, coming off the bench in an 18-minute cameo during the Premier League club's 2-0 win over Melbourne Victory at the MCG.

With Liverpool 1-0 up, the Uruguayan laid on the Reds' second for new signing Iago Aspas late in the match.

After the game, Rodgers said: "There's nothing new to report. He [Suarez] is very much a Liverpool player and over the course of the next couple of weeks we've got to get him up to speed."

Rodgers did, however, remind Suarez of the debt he feels the player owes the Liverpool fans who have stood by him after two seasons of controversy.

"The support he has received from the supporters and the people of the city of Liverpool has been unrivalled," Rodgers added.

"In this period of time he's missed a lot of games for the club through various reasons. The people have stood by him like a son and really looked after him. Whatever happens in the coming weeks that will be in his mind because it's something you can never forget."

Liverpool have now turned down two offers from the Gunners, who are keen to boost their attacking options, while Real Madrid, now managed by Carlo Ancelotti, also remain interested in the player but have yet to make a formal offer.

Following Arsenal's most recent approach, a post on Liverpool owner John Henry's Twitter page read: "What do you think they're smoking over there at Emirates?"

It is unclear whether Henry is talking about Arsenal's attempts to sign Suarez or their valuation of the player.

While Liverpool remain determined to keep Suarez, who scored 30 goals for the club in 44 appearances last season, their resolve is likely to be tested if the bids continue to rise. Should Arsenal persist and have an improved bid accepted, it would more than double their previous highest initial outlay on a transfer.

Suarez wants to leave Anfield to play for a Champions League club despite only signing a new long-term deal last summer.

Speculation has grown about Suarez's future since he was punished with a 10-game ban at the end of April for biting Ivanovic.

The striker still has to serve six games of that suspension and was also banned in 2011 after being found guilty of racially abusing Manchester United's Patrice Evra.