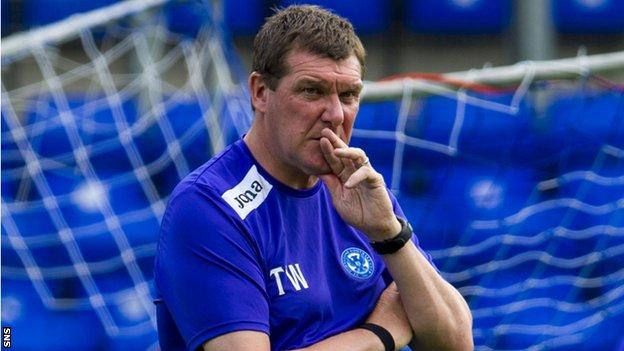 St Johnstone boss Tommy Wright has described Thursday's Europa League clash against Rosenborg as "one of the biggest games in the club's history".

Saints hold a 1-0 lead from the first leg in Norway courtesy of Frazer Wright's goal.

"The players have given us a great opportunity to progress because I don't think anyone gave us a chance in Norway," he told BBC Scotland.

"Hopefully it's going to be a memorable night."

Wright described the win in Norway as "a tremendous achievement" but cautioned against complacency ahead of the game at McDiarmid Park.

"As I've been saying, it's only half-time and we have to start all over again tonight and probably have to work even harder to get a result.

"First and foremost we have to limit them to very few opportunities; we did that last week.

"However, we've also got to have a goal threat and can't just be sitting in. I can't see where our gameplan will change too much.

"We'll probably have a massive crowd tonight and we've got to be careful we don't get carried away with the occasion.

"I'm looking for a disciplined performance."

Responding to reports that Rosenborg coach Per Joar Hansen believes Wright is playing mind games ahead of the tie, the St Johnstone boss said: "I'm not intelligent enough to play mind games.

"They're the biggest club in Norway with a budget of £20m and for them not to get through, I can't see how that will be anything but a disaster for them.