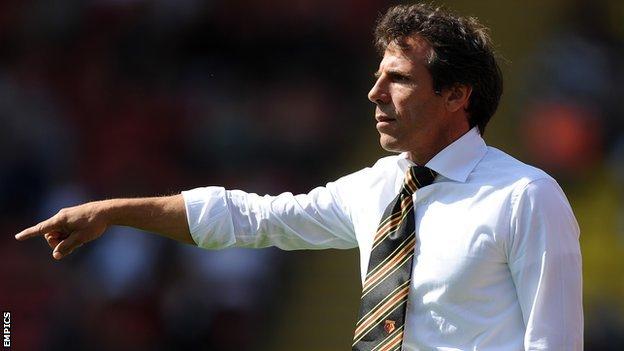 The Hornets have overcome a transfer embargo and a change in loan rules to make 14 signings.

"I'm delighted for me and delighted for the supporters. Now they know that we've got this squad they can relax a bit," Zola told BBC Sport.

"I was confident. I knew how things were going. It's looking good for this club and I hope the results will come."

Twelve of those new signings were completed in the last five days, bringing to an end an anxious wait for news of new arrivals.

Watford were placed under transfer embargo last season for financial irregularities under previous owner Laurence Bassini, but the club have been allowed to register players with the prior permission of the Football League.

Current owners the Pozzo family oversaw the loan moves of 12 players from their sister clubs Udinese and Granada to Vicarage Road last season, a strategy which provoked the Football League to restrict the number of foreign loans a side can make.

The rule change has not affected Zola's recruitment however, as he has simply signed players from the Italian and Spanish clubs on permanent deals, many of whom were on loan last season.

Brazilian Iriney is the latest new addition, joining from Granada, and the 32-year-old made a good impression on his manager in Wednesday's 1-1 friendly draw at Peterborough, playing in a deep midfield role.

"He does exactly what is needed to be done. He's always in a good position and plays it simple," said Zola.

"He was only behind Lewis McGugan in terms of performance. Lewis was really good."

Udinese wideman Jaime Romero has been training with the squad and was expected to sign, but Zola said an ankle injury to the Spaniard may put the move in doubt.