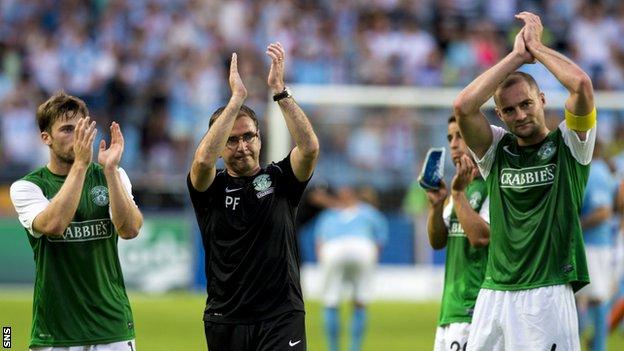 Pat Fenlon aims to "put a smile" back on Hibs supporters' faces following the loss of a club legend.

Hibs are gearing up for the Europa League visit of Malmo after paying tribute to the late "Famous Five" forward Lawrie Reilly.

The Edinburgh side trail 2-0 from the first leg but Fenlon hopes to overturn that deficit at Easter Road.

"It would be a nice way to pay real tribute to [Reilly's] memory if we can go and win the game," he said.

And Fenlon believes victory against Malmo would honour his memory.

"It's been a very sad and difficult week for everyone associated with the club. He was obviously one of the best players the club has ever had," said the Hibs boss.

"If you're looking for a true Hibs man through and through, he fits the bill.

"It would be a nice way to pay real tribute to his memory if we can go and win the game.

"It would be lovely to put a smile back on people's faces. We've got a tough task but we are playing at home and we're looking forward to a big crowd getting behind us here.

"If we can nick the first goal, let's see what happens."

"He was such a legend and such a hero to so many of the people that come here," McPake said.

"The fans will be here paying tribute to Lawrie and that's only going to help us with emotion and the atmosphere.

"It's something we have got to react to and use. We were all deeply saddened by the news at the start of the week.

"But it's spurring us on a bit because we want to go out and do it for him and his family."