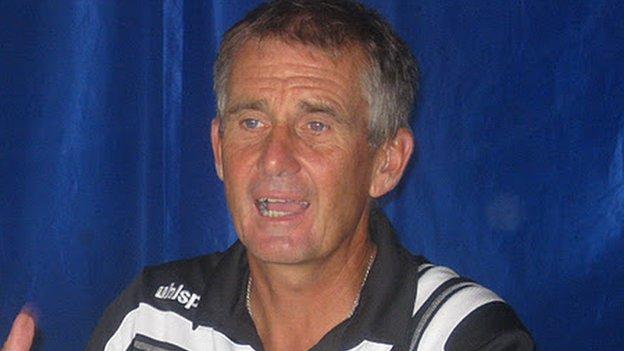 Tanzania coach Kim Poulsen has warned Uganda ahead of the crucial second leg of the 2014 Africa Nations Championship (CHAN) qualifier on Saturday in Kampala.

The Taifa Stars are 1-0 down from the first leg in Dar es Salaam but Poulsen believes his side can overturn the deficit.

"We are here to win the match and Uganda should be warned. If they could beat us 1-0 in our own backyard, we can also stop them here in their home," he told BBC Sport.

The Tanzanians, who qualified for the inaugural 2009 CHAN event in Ivory Coast arrived in Uganda on Wednesday.

Dane Poulsen believes Tanzania have improved a lot and he is in no doubt they will give their all as they try to stop Uganda from earning the draw they need to qualify for next year's tournament in South Africa.

"We know what to expect against Uganda because they are a strong side, but we are also ready to show that we are a strong team and can qualify away from home," he added.

Experienced goalkeeper Juma Kaseja will skipper the Taifa Stars and the team will also look to industrious midfielder Mrisho Ngassa and John Bocco for the goals.

Uganda Cranes coach Milutin 'Micho' Sredojevic is keen for his team to kill the game off quickly by getting an early goal - although he admits his side have been lacking firepower.

"We need to score early to make the match more complicated for them," said the Serbian.

"We are creating many scoring chances, but our scoring rate is very low and we need to work on it before the game."

Midfielder Denis Iguma, who scored the lone goal in the first leg, is expected to start the game alongside skipper Hassan Mawanda Wasswa.