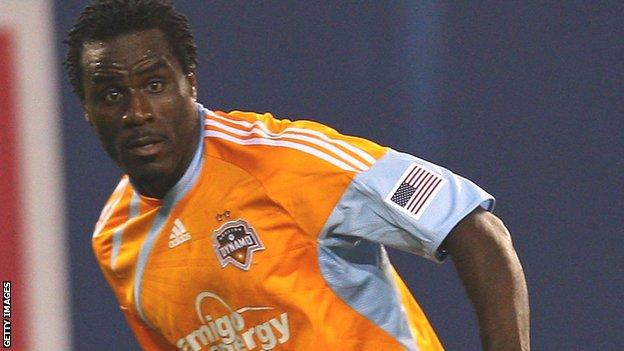 The 38-year-old, who won one cap for Nigeria, will work with the club's strikers and will play when required.

"It is quite a coup for a club like Colwyn Bay to get him," manager Frank Sinclair told the North Wales Weekly News.

Sinclair has also arranged for former Tottenham Hotspur defender Pascal Chimbonda to play in a friendly.

The 34-year-old ex-France defender wants to return to professional football after being released by Doncaster Rovers over a year ago.

He played a friendly for Northern Premier League Division One South side Market Drayton against Notts County on Wednesday.

Sinclair will give Chimbonda a run out in Saturday's home match against a Chelsea XI at Llanelian Road.

"He's a friend of mine and he will play for us against Chelsea to get some fitness while he searches for a new club - similar to what Wayne Thomas did against Wrexham on Tuesday," added Sinclair, the former Chelsea and Leicester City defender.

Colwyn Bay won six consecutive games at the end of last season to avoid relegation from the Conference North.