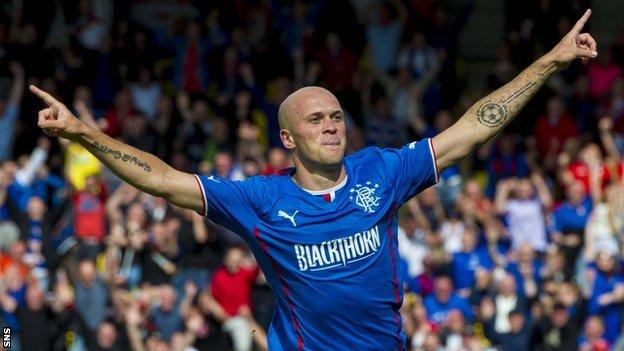 But former Motherwell midfielder Law marked his competitive Rangers debut by firing the opener from close range on the half-hour mark.

His cultured curling drive extended the lead on the stroke of half-time and Ian Black and David Templeton fired two more midway through the second half.

Technically, one place separated these two sides last season, with Rangers effectively replacing the relegated Coatbridge club in the third tier of Scottish football after their title win.

However, they are worlds apart in terms of resources, with Law earning more in his weekly wage packet than the whole of Rovers' part-time squad put together.

Yet Rangers had come close to stumbling at the same stage last season, when it took a goal in extra-time to overcome a Brechin City side who were among Rovers' rivals in Division Two.

While Brechin went on to challenge for promotion, Rovers find themselves rebuilding under new manager James Ward for life back in the lowest tier of the senior game.

His own new recruits equipped themselves well in preventing Rangers' Scottish Premiership-quality side from testing goalkeeper Neil Parry until the 23rd minute.

Two efforts, one from the head and one a half-volley, from Northern Ireland striker Andrew Little were easily gathered by the summer signing from Queen's Park.

The latter chance was set up neatly by Jon Daly in what was an otherwise anonymous inauspicious display by the former Dundee United striker.

However, it was the other summer signing permitted to play as a trialist who broke Rovers' resistance.

Little had been seen from Rovers in attack and, just when they looked like testing 20-year-old debutant Scott Gallacher in Rangers' goal, they were caught on the counter-attack.

A Lee Wallace cross found its way to Law at the back post and the Englishman fired high into the net.

The same pair combined for the second, with Law gathering a short corner, turning inside his marker and guiding his shot inside the far post.

A blue tide continued towards Rovers' defence after the break, although David Crawford had an effort blocked in front of Rangers' goal.

Any thoughts of a surprise comeback ended when Daly put Black clear to power a low drive under Parry.

Three minutes later, substitute Templeton marked his return from injury by finding the net with a powerful shot from the edge of the penalty area.

For Rovers, the bright spot was a sunny afternoon in the television spotlight live on BBC ALBA and a crowd of 5,345 at the home of Livingston - five times what would have been possible had they played it at their own Cliftonhill Stadium.

For Rangers, they progress as expected to the second round in a style that suggests they are better equipped for the league task ahead than they were at the same stage last season - and their fans have another hero in new signing Law.