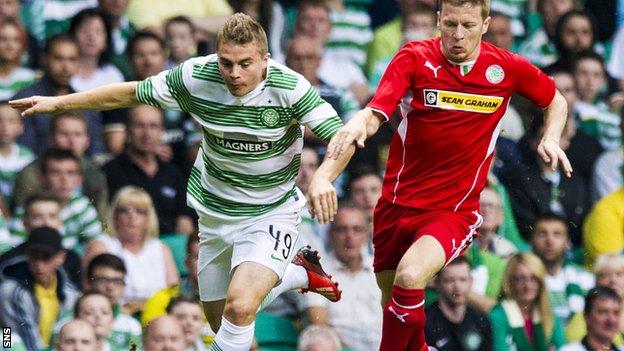 Uefa have begun disciplinary proceedings against Celtic over the lighting of fireworks during the Champions League qualifier against Cliftonville.

Neil Lennon's side won the match at Celtic Park on Tuesday 2-0 to secure a 5-0 aggregative win.

Celtic confirmed that three fireworks exploded within Section 111 and warned fans over their future conduct.

The case will be discussed by Uefa on 22 August.

Celtic were fined £21,000 over fan-related incidents during a match against Udinese in December 2011.

In a statement on their official website, Celtic warned supporters within Section 111, known to house the Green Brigade, over their behaviour.

Raising concerns over overcrowding, the refusal of supporters to comply with safety stewards, "body surfing" and seat damage, the club said the safety of supporters was their primary objective.

"Following the events of last Tuesday's match, the club's position was to close Section 111, but following discussions between the club's supporters' liaison officer and representatives of the 'Green Brigade' that decision has been reviewed and the section will remain open," the club said.

"The club is keen to work with spectators in Section 111 to resolve safety concerns. However, it should be understood that failure to stop this unsafe behaviour will require the closure of this area in Celtic Park.

"The club recognises the many examples of good support for the team emanating from this part of the ground and in particular the efforts of the 'Green Brigade' in organising positive displays which are commended.

"However, the unsafe aspects of spectator behaviour in Section 111 require to be addressed with immediate effect."