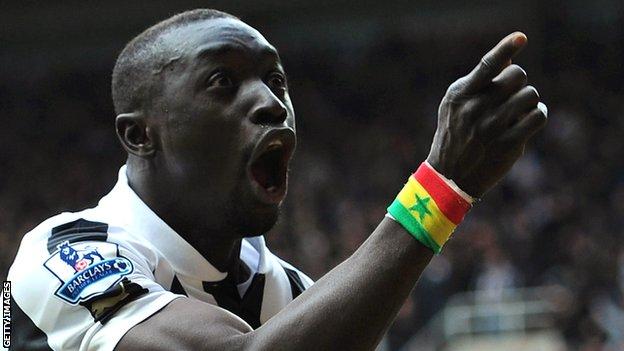 Papiss Cisse and Newcastle have reached an agreement that means the striker will wear the Wonga logo on his club shirt despite his religious beliefs.

Cisse, a Muslim, pulled out of Newcastle's pre-season tour after telling the Magpies he was not prepared to promote the money-lending company.

However, after a week of talks, both sides are satisfied and Cisse is now available to play for Newcastle again.

The 28-year-old will return to training with the first-team squad on Friday.

Cisse is one of a number of Muslims at Newcastle but he was the only one to object to the club's choice of shirt sponsor.

The Senegal forward has been training on his own while his team-mates have been on tour in Portugal.

In October, it was announced that high-interest pay-day lender Wonga would take over from Virgin Money as Newcastle's sponsor from the 2013-14 season. It is thought the contract is worth around £8m a year to the club.

Speaking in June, PFA deputy chief executive Bobby Barnes told BBC Sport: "We're all aware that clubs need to generate revenue and sometimes have to use a wide range of companies.

"However, if someone feels very, very strongly that it's not compatible with their beliefs, then some sort of solution should be found."

Cisse joined the Magpies in January 2012 and has scored 26 times in all competitions.