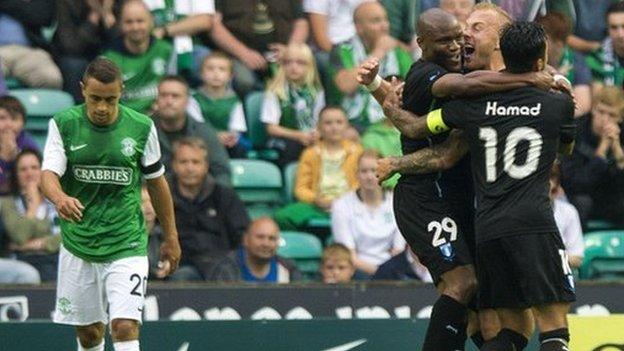 Rikard Norling says Malmo will be focused on an important league fixture before they can turn their full attention to the Europa League tie with Swansea.

The Swedish side will face Swansea in the third qualifying round after a 9-0 aggregate win over Hibernian.

The Malmo boss says Swansea will be a big test but said Sunday's game at Gefle will be the focus before then.

I'm happy with the team's performance. We're in good shape at the moment

"We'll look forward to that game after the league game on Sunday," he said.

"At the moment we're focused on our next league game because we're in the running for the championship.

"That comes on Sunday and after that we're playing Swansea. We'll pick that up on Monday."

Norling's side are currently second in the Swedish Allsvenskan, two points behind leaders Helsingborg after 16 games.

Norling's side confirmed their place in the Europa League third qualifying round after thrashing Hibernian 7-0 at Easter Road to complete a 9-0 aggregate win.

Strikes by Magnus Eriksson and Emil Forsberg were added to by Markus Halsti and Miiko Albornoz before the break.

And efforts by Tokelo Rantie, Jiloan Hamad and Simon Kroon completed the rout in the second half.

"I'm happy with the team's performance. We're in good shape at the moment," Norling said following the 7-0 win over the Scottish Premier League side.

"We have some good players [and] when we are attacking we have quality.

"When we get performances like this and results like this, of course the young players want more."