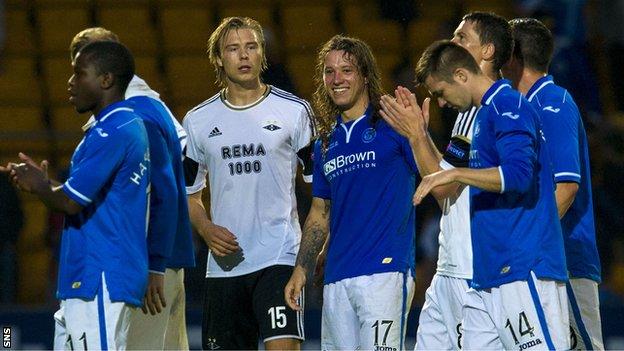 St Johnstone manager Tommy Wright has set his sights on the Europa League group stage after eliminating Rosenborg in the second qualifying round.

Stevie May's goal gave Saints a 1-1 draw in Perth and a 2-1 aggregate victory to set up a tie with Minsk.

"The standards have been set and if we maintain those standards there's no reason why we can't go the whole way to the league stages," said Wright.

"We dared to believe and followed it through."

We did say we'd like to fill this place and give them a night to remember, and we did.

The Perth side had gone into the second-leg at McDiarmid Park with a 1-0 lead from the first-leg in Norway.

However, that was cancelled out in the fourth minute when Alexander Soderlund stroked the ball past Saints goalkeeper Alan Mannus.

But the hosts responded brilliantly and May, who last played competitively for St Johnstone in August, equalised by lifting home David Wotherspoon's pass.

"The reaction to going a goal down was tremendous," explained Wright.

"We deserved to get the result that we needed. We showed courage on the ball because we passed it well, particularly in the first half.

"It was a wee bit helter-skelter at the end because I think they had run out of ideas and were just lumping it in the box.

"For us to get a crowd of nearly 8,000 was magnificent. We did say we'd like to fill this place and give them a night to remember - and we did."

May, who scored 26 goals on loan to Hamilton Academical last season, only started because of an injury to midfielder Chris Millar.

"Stevie's a goalscorer," Wright added. "Sometime fate deals you a good hand and I think it was maybe fate tonight that he would start and score.

May, 20, admitted he had to get his team-mates to talk him through his goal after the game as it had all happened so quickly.

"There's not a better feeling than scoring goals," he said.

"Everything went to plan in the end and, as a team and as fans, it was a great night for all."

St Johnstone will head to Belarus to face Minsk in the first leg on Thursday 1 August. Should they progress, a play-off round awaits before the group stage of the competition.