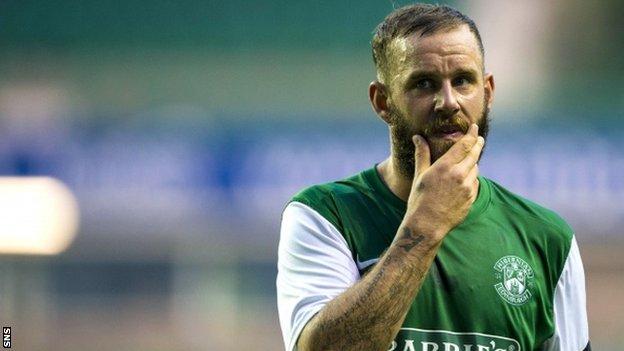 Hibernian manager Pat Fenlon has apologised to the club's fans for witnessing the worst-ever aggregate defeat by a Scottish club in Europe.

"Disappointed, embarrassed I suppose more than anything else," said Fenlon.

"It's my team I put out. Of course you ask questions of yourself. That was not good enough and I apologise to the supporters for that."

Hibs' aggregate loss in the second qualifying round surpassed Rangers' 12-4 defeat by Eintracht Frankfurt in 1960 as the Germans headed for that famous 7-3 European Cup final reverse at the hands of Real Madrid at Hampden Park.

There's no excuses for that. That's a poor performance, as simple as that. I'm not going to stand here and try to defend that

Fenlon indicated that it would result in much soul searching when he returns to his desk in the morning.

"We'll have a look at it tomorrow and see where we go from there," he told BBC Scotland.

Malmo, are midway through their season in Sweden, where they lie two points behind leaders Helsingborgs.

Hibs have yet to begin their Scottish Premiership campaign, but Fenlon was not prepared to make that an excuse for the size of their defeat.

"We were just well beaten by a better side," he said of a game watched by a healthy crowd of 16,000.

"But I apologise to the supporters. I don't want to put them through that."

Asked if the result emphasised that he needed new signings, Fenlon said: "We've known that for a while and have been trying to do that, but we still had a half-decent team on the park tonight. We just didn't compete.

"They're a good side, there's no doubt about that, their technique was very, very good.

"But there's no excuses for that. That's a poor performance, as simple as that.

"Like I said, I can't defend that and I'm not going to stand here and try to defend that."

Hibs' misery was compounded when skipper James McPake was forced out of the action early on with a back problem and the defender is now expected to be sidelined "for a while", according to Fenlon.

A Twitter account purporting to be Swindon Town's James Collins had earlier in the day indicated that the striker had completed his transfer to Hibs after a fee of around £200,000 was agreed between the clubs earlier this week.

"I haven't seen the chairman today," said Fenlon. "We were in negotiations with him and his club and I don't know where it got to.

"We have been working away on it, so hopefully we can get it done."