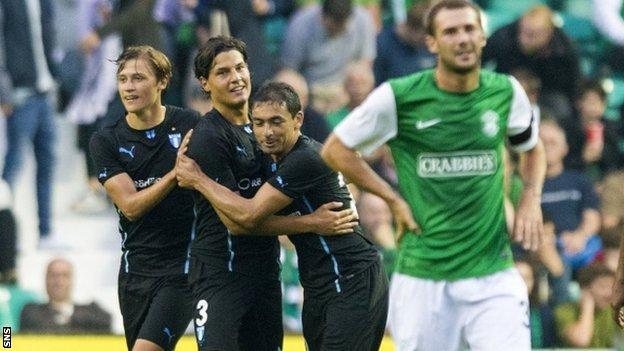 Malmo coach Rikard Norling says his side had a "lucky day" as they hammered Hibernian to set up a Europa League qualifier against Swansea City.

The Swedes won 7-0 in Edinburgh to complete a 9-0 rout on aggregate.

"It was one of those lucky days for us," he said. "Everything that went close to the goal, it wanted to go in."

Norling insisted that he would not be thinking about facing Swansea until after Sunday, when his side travel to face Gefle in the Swedish top flight.

We have more than 10 games to go in our championship and the next comes on Sunday and, after that, we think of Swansea

While Hibs have yet to start their domestic season, Malmo are two points behind leaders Helsingborgs after 16 games.

"At the moment, we are focused on our next league game because we're in the running for the championship," he told BBC Scotland.

"We have more than 10 games to go and the next comes on Sunday and, after that, we think of Swansea.

"But we have a young team and they're hungry and, when we get results and performances like this, of course the young players want more and aim higher."

Hibs manager Pat Fenlon had hoped that his side would mark the death of club legend Lawrie Reilly with a victory but instead suffered the worst aggregate defeat ever for a Scottish club in European competition.

Norling showed great sympathy for his opposite number, remarking: "It is a difficult day for Hibernian as a club. The week has been tough for them with the tragic loss of a great player in their history.

"We had a few goals in the beginning and then their captain, James McPake, had to go off injured and I think maybe they lost more belief and made us a little stronger.

"Normally, it's an even game between the clubs, but sometimes that can happen when we are in top shape and they haven't started their league.

"We are in a good shape at the moment. We have some good players and, when we are attacking, we have quality."