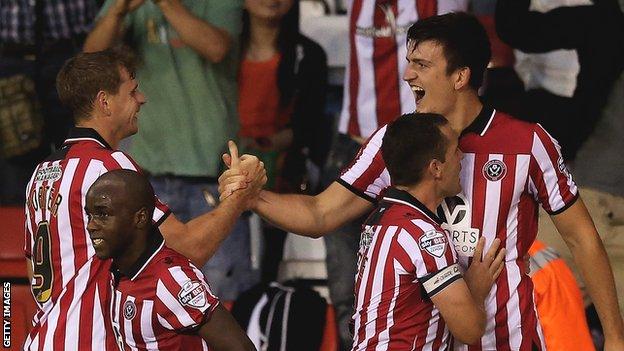 Sheffield United claimed victory in the first match of the 2013-14 Football League season with a narrow win over 10-man Notts County.

The visitors had centre-back Gary Liddle sent off inside the first 15 minutes for a dangerous high tackle on Blades midfielder Kevin McDonald.

Notts County had seven players sent off last season, more than any other club in League One.

Enoch Showumni levelled with a low volley but Harry Maguire's header won it for David Weir's side.

The game had been selected as one of six fixtures to mark the Football League's 125th anniversary.

Sheffield United's Bramall Lane home is the oldest professional football ground in the world, while Notts County were one of the 12 founder members of the Football League and are the oldest team in the world currently playing at a professional level.

The visitors came close to breaking the deadlock when home goalkeeper George Long was forced into an excellent reaction stop from Danny Haynes's header.

It proved a pivotal moment, as from the ensuing Blades breakaway, Liddle took out McDonald with a high challenge that saw referee Keith Stroud issue a red card.

Thereafter the hosts, under the management of Weir for the first time in a competitive fixture, took total control of the game.

It came as little surprise when they took the lead through a well-worked goal. A concerted spell of passing culminated in Febian Brandy releasing Westlake down the right-hand side and his low centre was steered into the bottom corner by McDonald from 10 yards.

This was the 79th competitive meeting between the two sides. The first was an FA Cup tie at Bramall Lane in January 1891. County won 9-1.

Despite struggling to get out of their own half, the Magpies could well have gone in level at the break, had Joss Labadie managed to get a clean connection on Alan Sheehan's free-kick.

The hosts, beaten in the League One play-offs in each of the last two seasons, picked up where they left off after the break but McDonald, Chris Porter and Neill Collins were all unable to keep their efforts on target.

They were made to pay for their profligacy when Showumni outmuscled Maguire from keeper Bartosz Bialkowski's long free-kick and fired a low half-volley in from 20 yards to give Notts the most unlikely of equalisers.

Weir's side responded well to conceding and regained the lead they deserved when Stephen McGinn's deep free-kick was headed home at the back post by Maguire.

Mark Fotheringham came close to levelling with a well hit 25-yard volley but the hosts ended the match in controlled fashion to take the three points.

"To get off to that start with three points, that's obviously what we came here for.

"I thought we played well, obviously the sending off (of Magpies defender Gary Liddle) changed things and added a little bit of pressure for us as well.

"And then them scoring (the equaliser) as well gave us another test so I think we learned a lot of things tonight.

"There were a few questions asked of us and I thought we came through well."